IT WAS ALL GOING SO WELL

8 CRUK shops visited (72 CRUK sites in total). 67% of total miles cycled (plus an extra 3.9 due to navigator error and inappropriate routes) 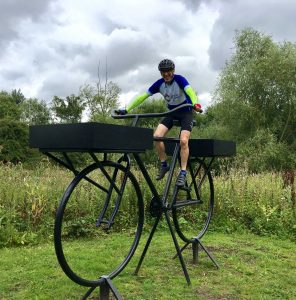 When Bruce started singing (alarm) to us at 6.40am ,neither of us wanted to get up. The cumulative effect of limited sleep each night was taking its toll. However, there wasn’t really an option.

Rubes had lost her 2 plastic stoppers from her handlebars a couple of days ago, but fortunately Cally had acquired some new ones FOC from Joe at Withington cycles. Rubes was once more looking good.Thanks Joe! 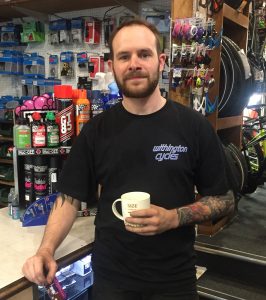 We pedalled off in the drizzle to get to our first shop in Didsbury at 9am. 2 minutes later we stopped at the traffic lights on Princess Parkway.  A car drew up beside us, opened its window and shouted “Good morning”. I assumed it was a madman and ignored it. Patrick got into conversation. It was Richard, the director of the CRUK Manchester Institute, who we’d met yesterday.We had a part conversation about the restaurant  we went to on Friday evening, whilst the lights were on red and then pulled up and continued when we’d got through the green lights.

We both felt far more relaxed than yesterday as we’d fewer shops to squeeze into the day. Our travels to Didsbury, Cheadle and Altrincham were uneventful. We had some frustration when our route led us to a rather overgrown cycle path, which would have slowed us down considerably and so rerouted. 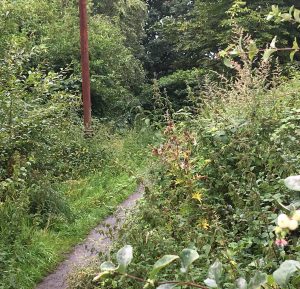 Our journey took us through suburbia – many 1930’s and 1950’s semis. Easy cyclingWhilst some of the route was on cycle lanes at the side of the road, we had to be cautious when crossing the tram lines – they’re just the right width to trap Rubes or Roberto’s front wheels. 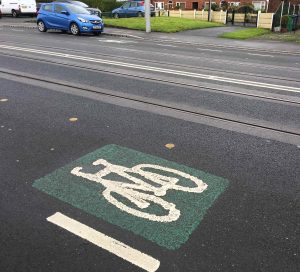 We pedalled on towards Knutsford. Our favourite part of today’s cycle ride was through Tatton Park (National Trust property with beautiful grounds). Cycling down the avenue of trees, herds of deer watched us. We continued past a lake which was glinting in the sunshine. As I looked over my right shoulder, I could see the neo-classical mansion. Everything felt good. 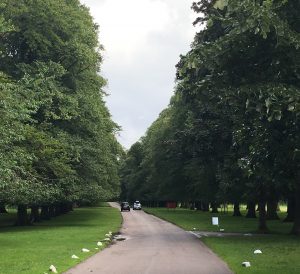 Knutsford has now been added to the list of places to return to. We both loved this gothic building which appeared to be serving coffees – unfortunately, there was no time to stop. 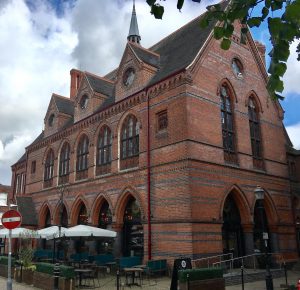 From Knutsford onto the ‘wiches’ Patrick tried this bike for size, but decided to stick with Roberto.

At Northwich, another one of our Campaigns Ambassador friends, Graham, joined us and the 3 of us cycled  to our next stop at Middlewich. 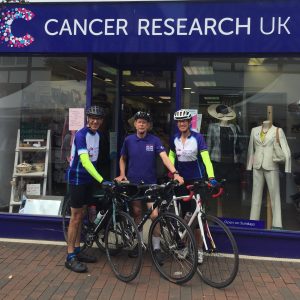 Graham, being local, knew the best route and so led the way. It was motivating to follow his tee-shirt and he also protected us from the wind which was getting up. Thanks Graham it was great to see you! 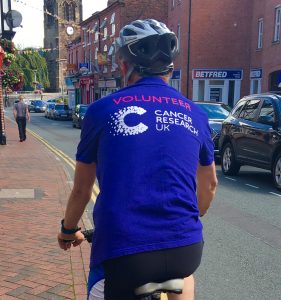 When we left Graham, bound for Nantwich and then Crewe, the going became tougher. This wasn’t from a cycling perspective – our mileage today was shorter than many other days,  the road was flat, the surface reasonably good, but it was one of those A roads which didn’t have anything really interesting and so the journey seemed longer than its 12 miles. When we reached our final shop in Nantwich, we were surprised to find that it didn’t have the traditional blue branding. Being a listed building, it had to be black. We’re wondering if this is the only CRUK shop where the frontage doesn’t have the familiar blue?

When we’d completed our visits to the shops, we cycled to our 7th Premier Inn in 9 days. First task always is to clean Rubes and Roberto and prepare them for the following day. When Patrick inflated my tyres he noticed the rear one was slightly soft. We decided to inflate it and check it out in the morning. However, having eaten our worst meal to date, we returned to the room and felt Ruby’s rear tyre – unfortunately we had a  puncture and so repaired it. However, in doing this we identified an issue which we couldn’t resolve. Having wasted more than half an hour, we decided that we’d go into a bike shop tomorrow morning. We found one, a 5 minute drive from the Premier Inn. However, being Sunday it doesn’t open until 10am. On a day when we’ve got to cycle almost 75 miles this isn’t what we need! 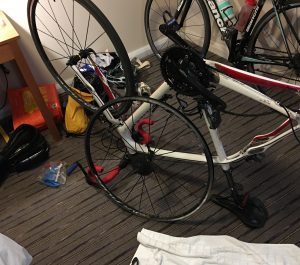 Thank you to friends and family who supported us in Altrincham today. Patrick’s sister Ann and niece Kate came along to meet us and Cally and daughter Evie. The coffee and brownies were appreciated! 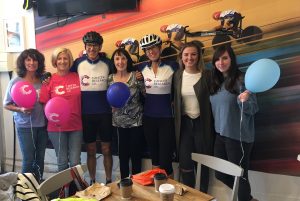 We continued to be impressed by the shops today. Thanks for the interesting facts you told us, the tea and  cakes you offered and the welcomes you gave us. Tomorrow is going to be a difficult day for us as the shops we’re going to aren’t open, so it’ll be a quick photo and then pedal on, without the motivation of meeting staff and volunteers. 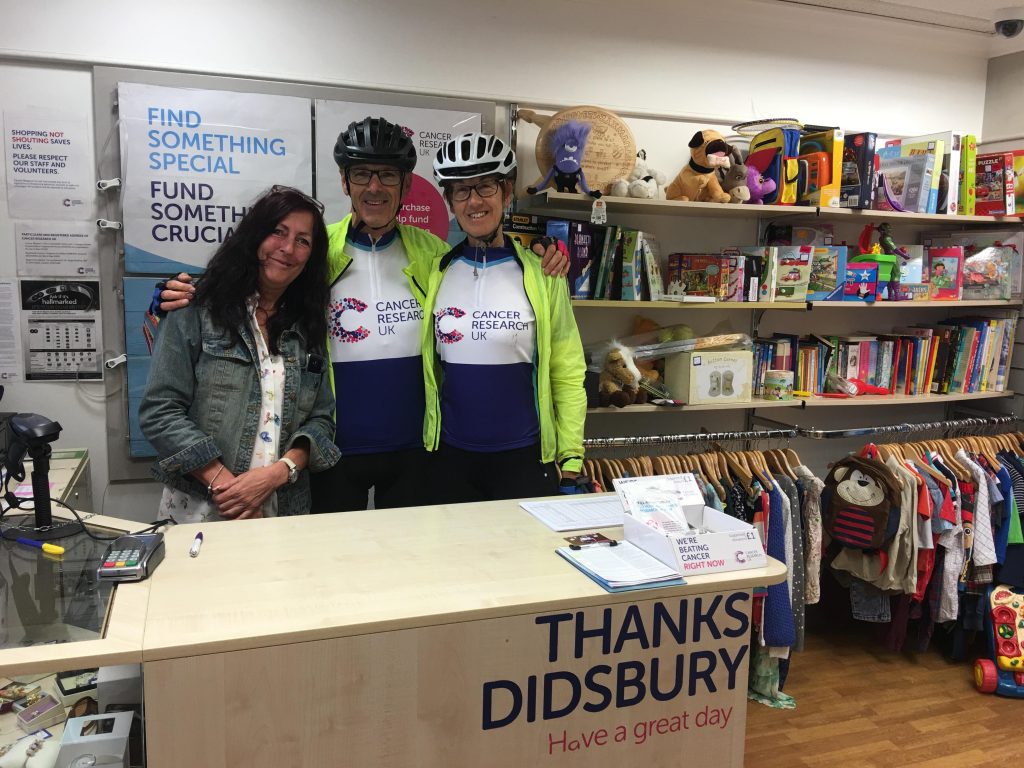 Alison described the shop as #FriendlyVibrantBusy 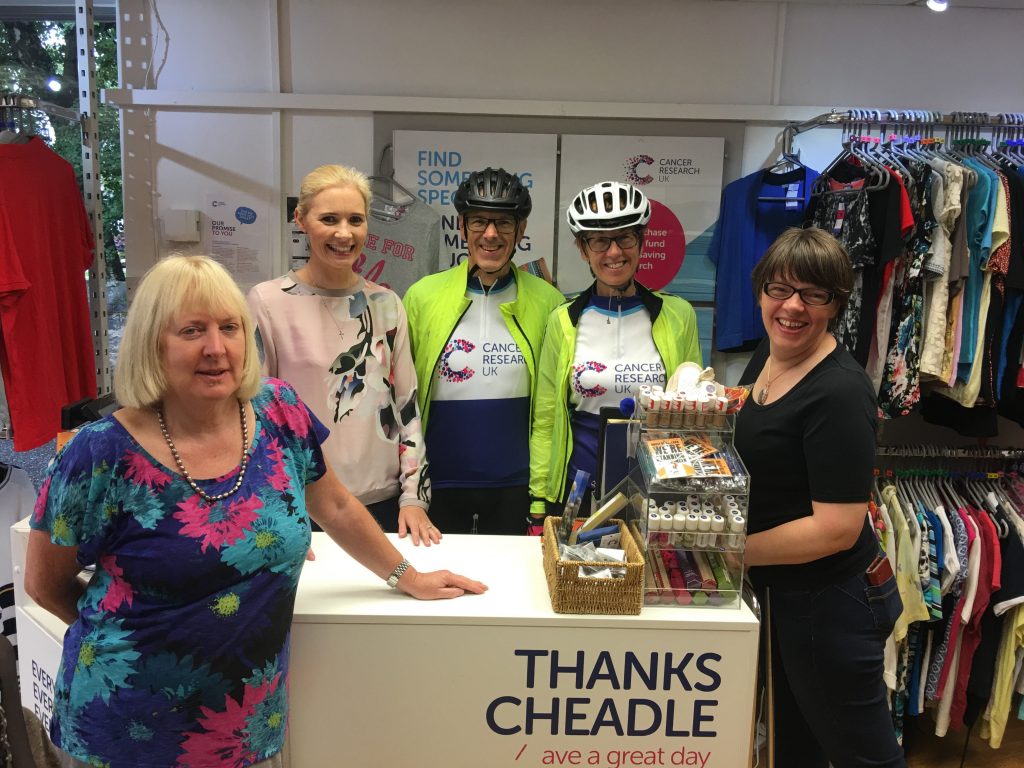 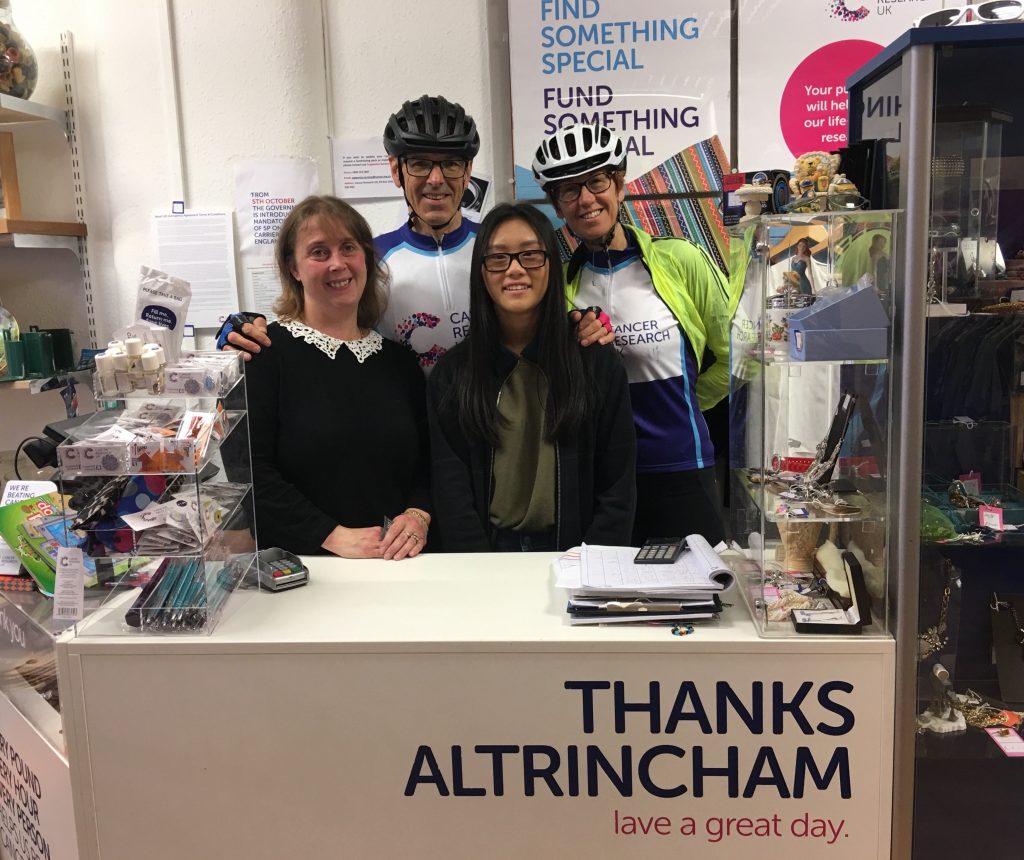 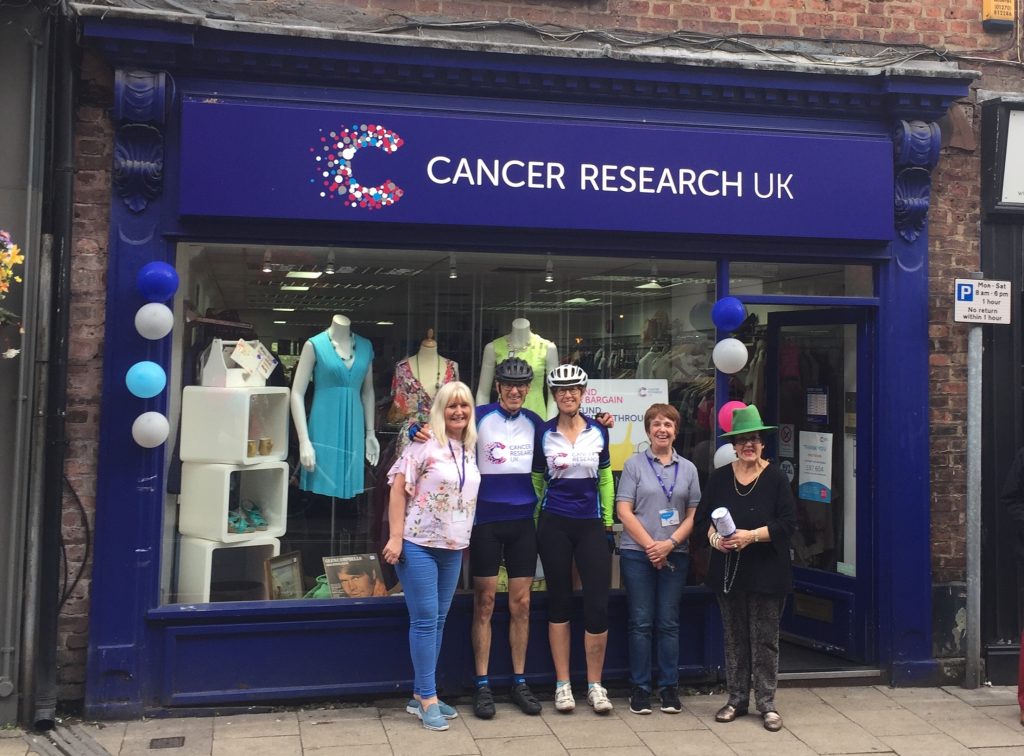 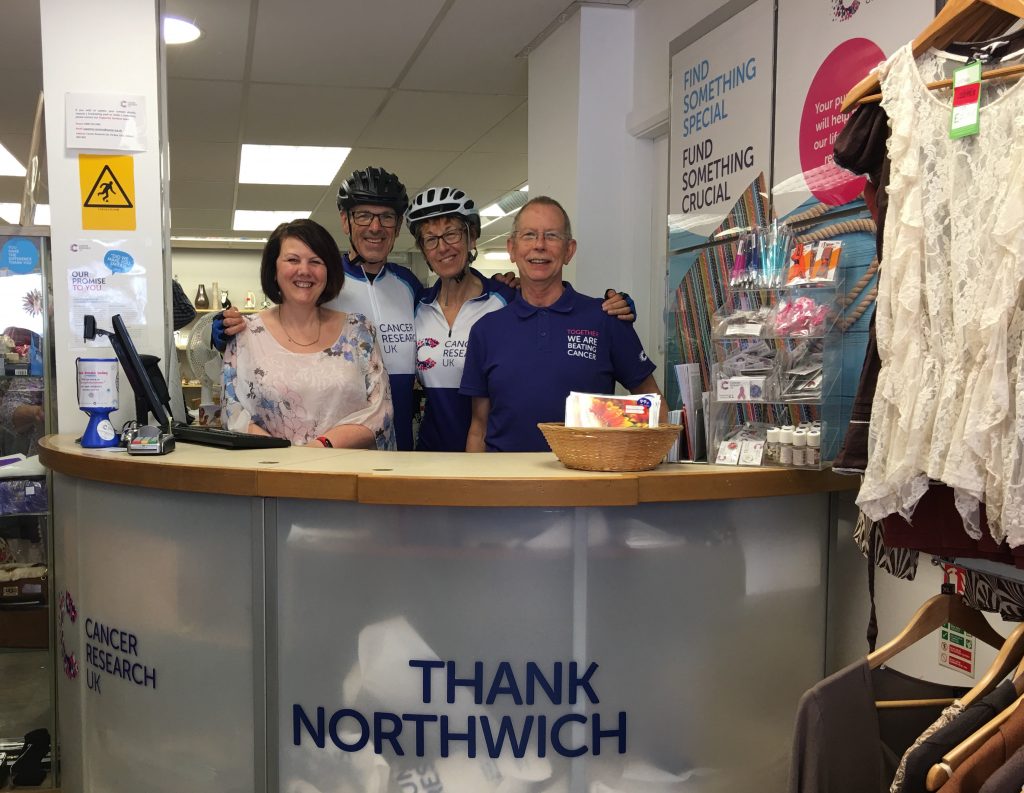 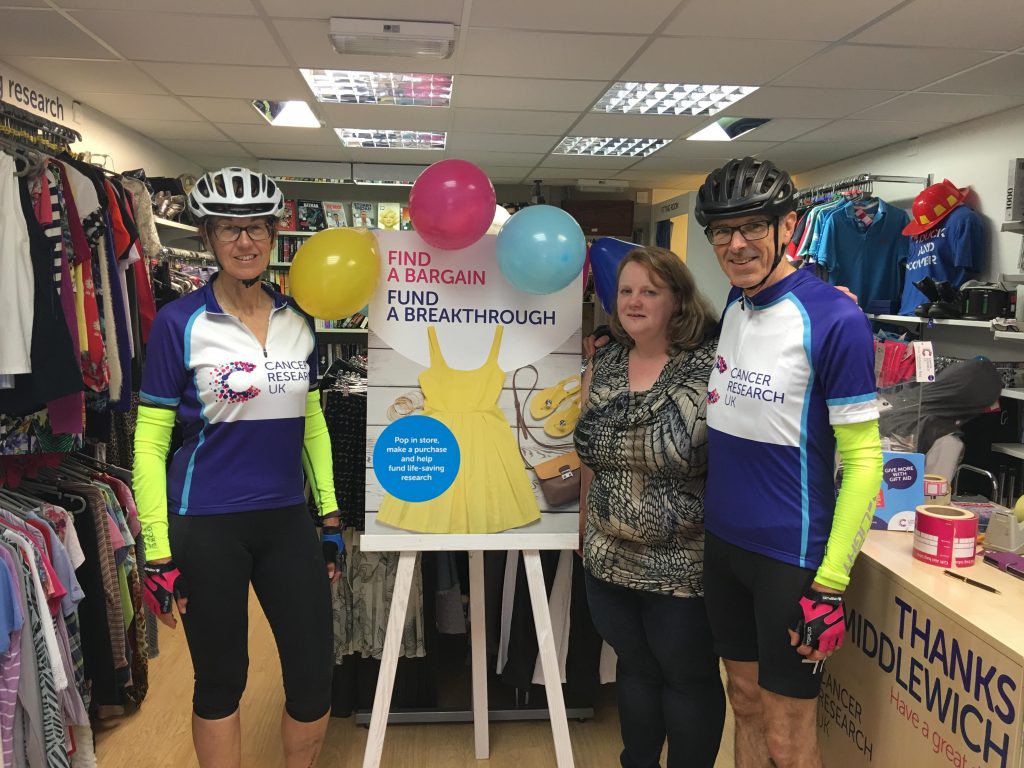 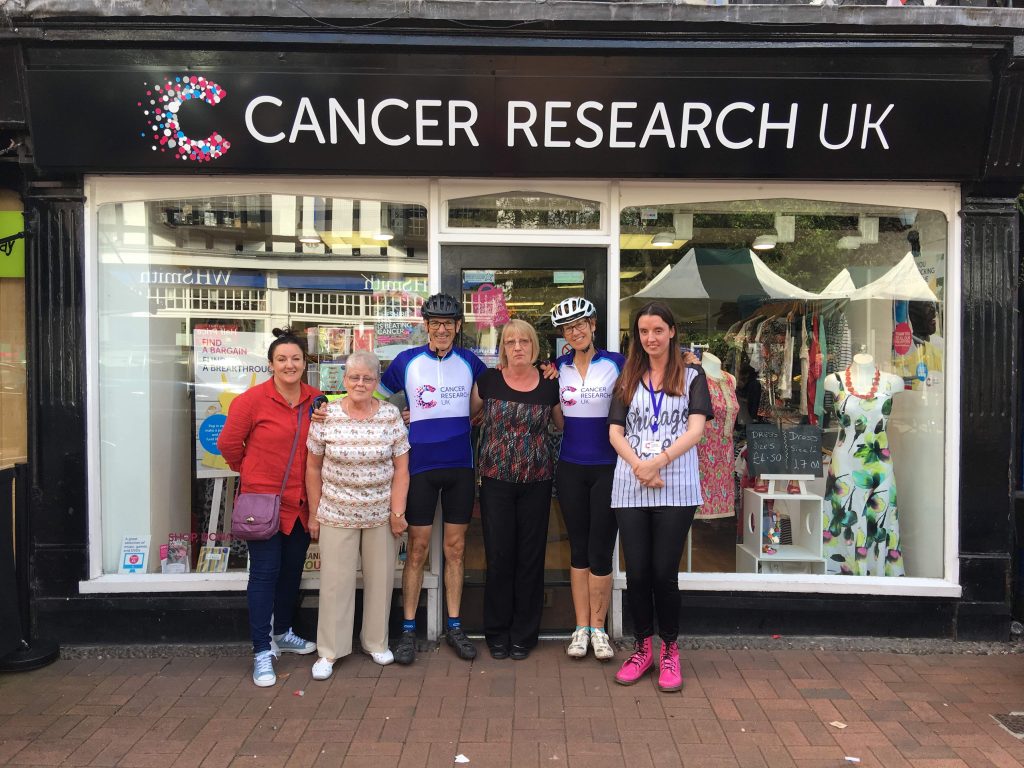 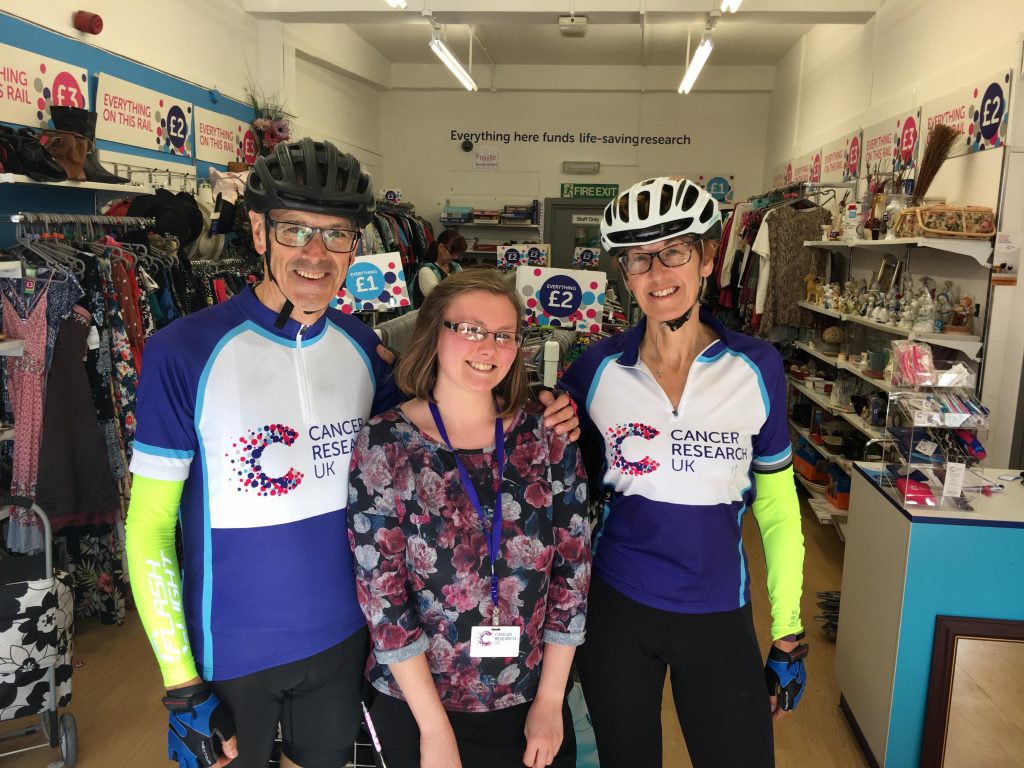 Sarah described the shop as #ValueVarietyCosy