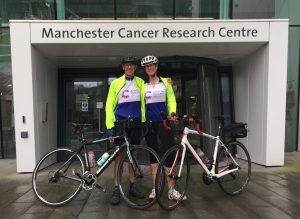 Another big day for our 101 CRUK Shop Challenge – we had 12 shops to visit and we were finishing the day at the CRUK Manchester Institute where Professor Richard Marais (a keen cyclist) would be waiting to welcome us along with some of his team. This was a really important event for us. The research centres are what our fundraising and the work of the shops is all about and we felt honoured to have the opportunity to meet some of the team who are working on world class cancer research (for further info on the key focus of research at this site, see the ‘CRUK’ tab in this blog).

Having had a heavy cycling day yesterday, but a more relaxed schedule, today we were back to the madness of Wednesday – 12 shops to visit and we’d arranged to arrive at the Manchester Institute at 4.30 pm.

We were keen to try and get ahead of our schedule, so that we were confident we could get to the Institute on time. Our route included a 8.1 mile cycleway called the Fallowfield Loop which would take us to the final shop, 0.2 miles from the Institute. From events of previous days, we learned that the quality of cycleways is very variable. If this was poor quality our speed on this critical 8 mile section of the route could be slow.

We were both feeling quite anxious about the schedule for the day. To give ourselves the best possible start we wanted to be at the first shop when it opened at 9am and had decided a departure time of 8.15am would give us plenty of time. Having eaten breakfast we returned to our room to get our gear and Rubes and Roberto (our bikes). However, Gerry the Garmin (satnav) had disappeared – panic! Having had a general rummage we then emptied all our bags, but to no avail. We knew he had to be in the room somewhere as he’d been charging overnight. Without him, we’d have a very difficult time. Patrick then realised that Gerry was hiding in one of the rear pockets of my cycling top. Panic over, but irritation at being stupid. 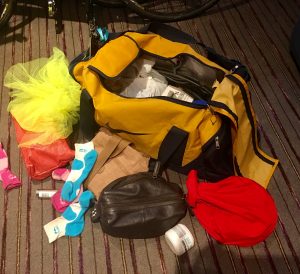 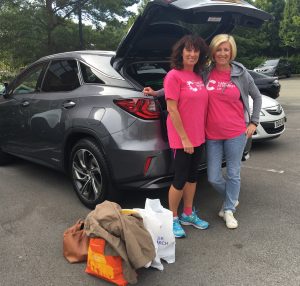 After a pose with Cally’s specially prepared banner, we were pedalling off down the country lanes of Cheshire. We were determined not to be late, despite the issue with Gerry and pedalled as fast as we could up the hill. Having reached the top of the hill, there was a steep downhill section which had the worst road surface on our journey so far  – the whole surface was pitted with potholes superimposed. Whoever’s responsible for roads around here, definitely isn’t a cyclist! 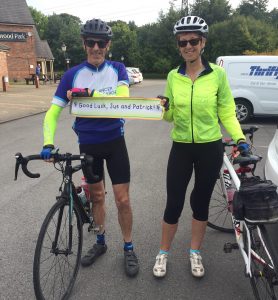 We arrived at the first shop, in Alderley Edge just before it opened, so were on schedule at shop 1. As we moved to Wilmslow, and Bramhall we felt good. We were generally cycling along  attractive B roads. When we looked to the right, the Pennines were in the distance with a purple hue due the the heather being in bloom. We continued via Hazel Grove and reached the shop in Marple 25 minutes ahead of schedule. We wanted to have contingency time in case of any issues later on in the day and in case the Fallowfield loop was in poor condition.

I was constantly looking at my watch to check we weren’t losing time. After Marple we were generally on A roads, where in some places traffic was queueing. Navigation in Stockport was not straightforward, but having found the 2 shops, we managed to get ourselves on the right road to Hyde. We’d lost 5 minutes by the time we reached the shop in Hyde, but were still 20 minutes ahead of schedule.  Onto Staleybridge, then Ashton under Lyne and still 15 minutes ahead of schedule, despite the traffic.

The next part of the journey was on the Fallowfield Loop. We’d watched a video on YouTube at home to try and review what the surface was like, but the quality of the film was not good enough to tell. The first part of the cycleway was alongside a canal. The surface was gritty, but quite acceptable. There were a number of very low bridges. 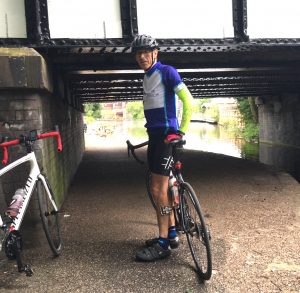 There were also a couple of other obstacles which slowed our progress, including several of these cobbled, humped bridges. 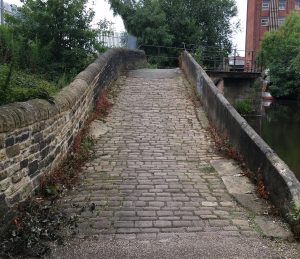 After a couple of miles the route moved away from the canal and the surface was a fantastic smooth tarmac, where we could speed along. However these devices at regular intervals slowed us down. I never did identify a good way to get through them! 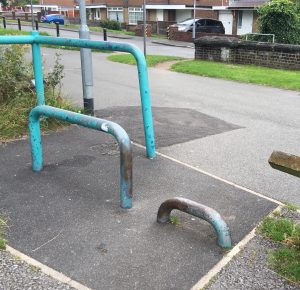 With a couple of miles to go to the final shop, our anxiety about the time disappeared. I asked Patrick how he was feeling and he told me “good”. when I was asked the same question, I answered “emotional”. He admitted to feeling the same. There had been some ‘quivering voice’ moments in the shops earlier in the day when volunteers and staff had been really kind to us.

We continued to pedal as fast as we could and eventually reached the point where we exited the cycleway. Patrick felt particularly emotional at this point, as he realised this was where both his kids, Anna and Cal, had lived when they were at Uni and he had happy memories of times spent here.. There were 2 things his wife Pam wanted to see – Anna graduating at Uni and Cal starting Uni. Fortunately, she managed both before she died so this place has some very bittersweet memories for the McGuire family.

The shop in Withington was less than half a mile away.It was 3:55pm. We spotted a Starbucks across the road and decided we’d use their ‘facilities’ and grab a very quick coffee (flat white and decaff flat white) along with a piece of lemon drizzle cake. 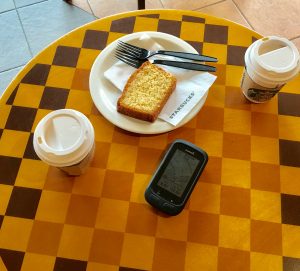 We were out in less than 10 mins and pedalled on to the shop. All the shops we’d been to today had been welcoming, there’d been balloons and posters, offers of tea and more. We never cease to be impressed by the commitment of staff and volunteers and were always interested in their stories. However, emotions had been building up all day and there were tears in the shop in Withington.

We pulled ourselves together to cycle onto the Institute, about 0.25 miles down the road. 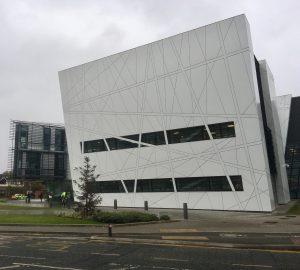 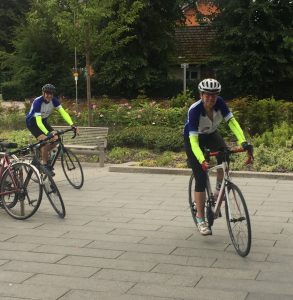 As we cycled in to be met by the Prof Marais, Clare Dickinson (lead CRUK nurse here), clinicians and researchers the tears came again. 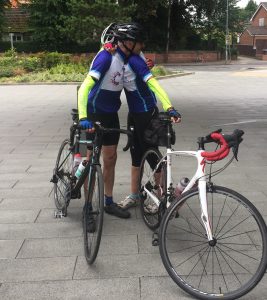 During the last 8 days, we have really appreciated the shops’ commitment to us and now felt a huge sense of pride to be visiting this site of such world class research. The work that is taking place here currently will make a difference to cancer outcomes in the future. Thank you to those who took the time to welcome us. It was a great ending to another incredible day. 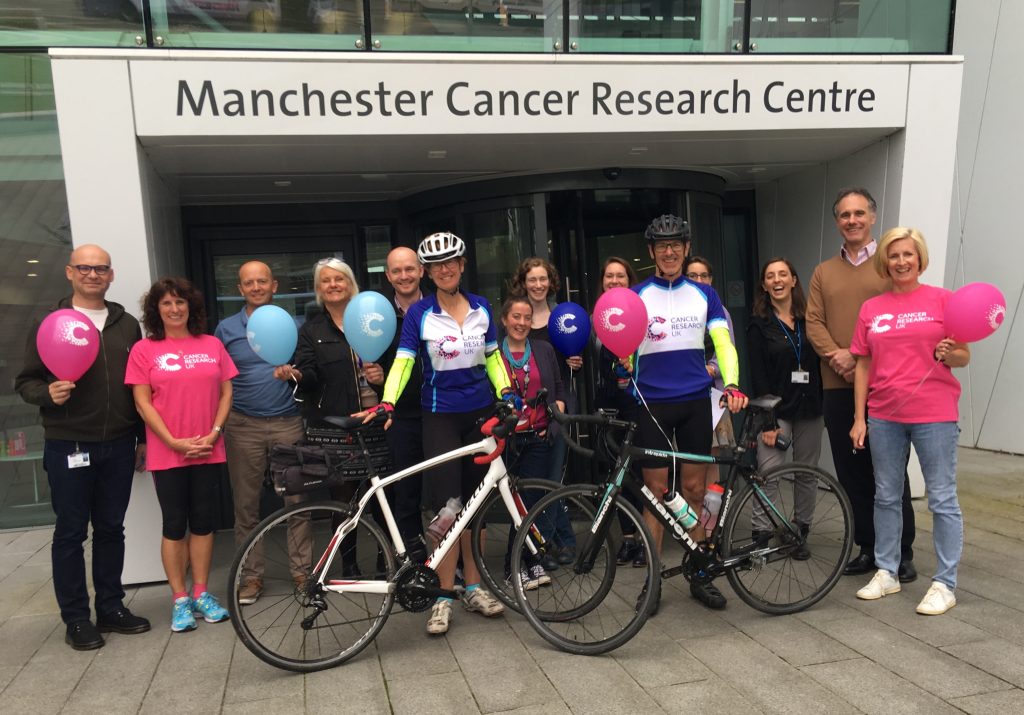 In addition to Jo and Cally we had some extra supporters for part of the day. Cathy, a colleague who I used to work with (and one of Philip’s favourite managers) joined us in Marple. Alan and Janet, Jo’s brother and sister-in-law also joined us here and spent most of the rest of the day with us. 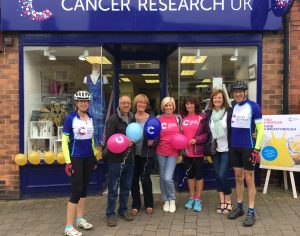 Sami, our Campaigns Ambassador friend joined us in Stockport. Thank you to you all for coming to support us. 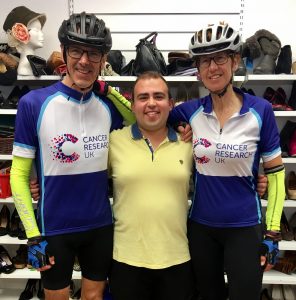 And now for the stars of the show, the CRUK shops, along with my researcher’s (Patrick’s) key facts about the towns we visited today

Key Fact – There really is an edge.It’s an escarpment of sandstone reaching 600ft high 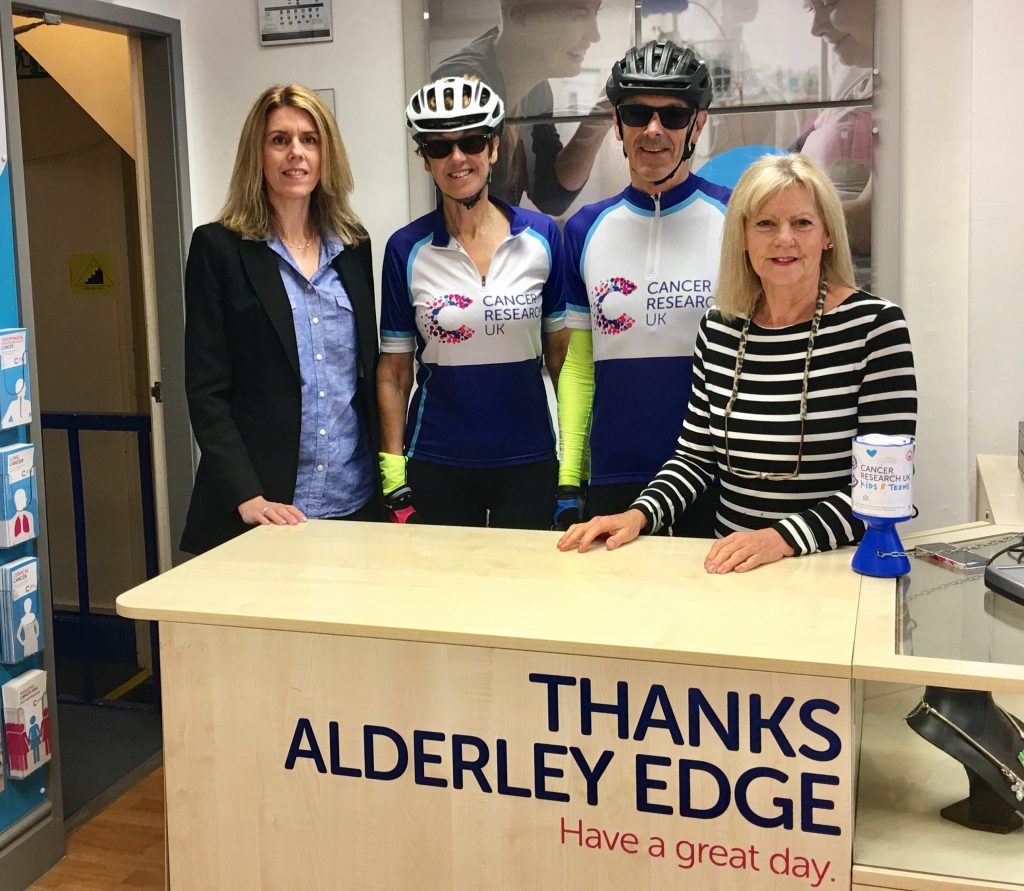 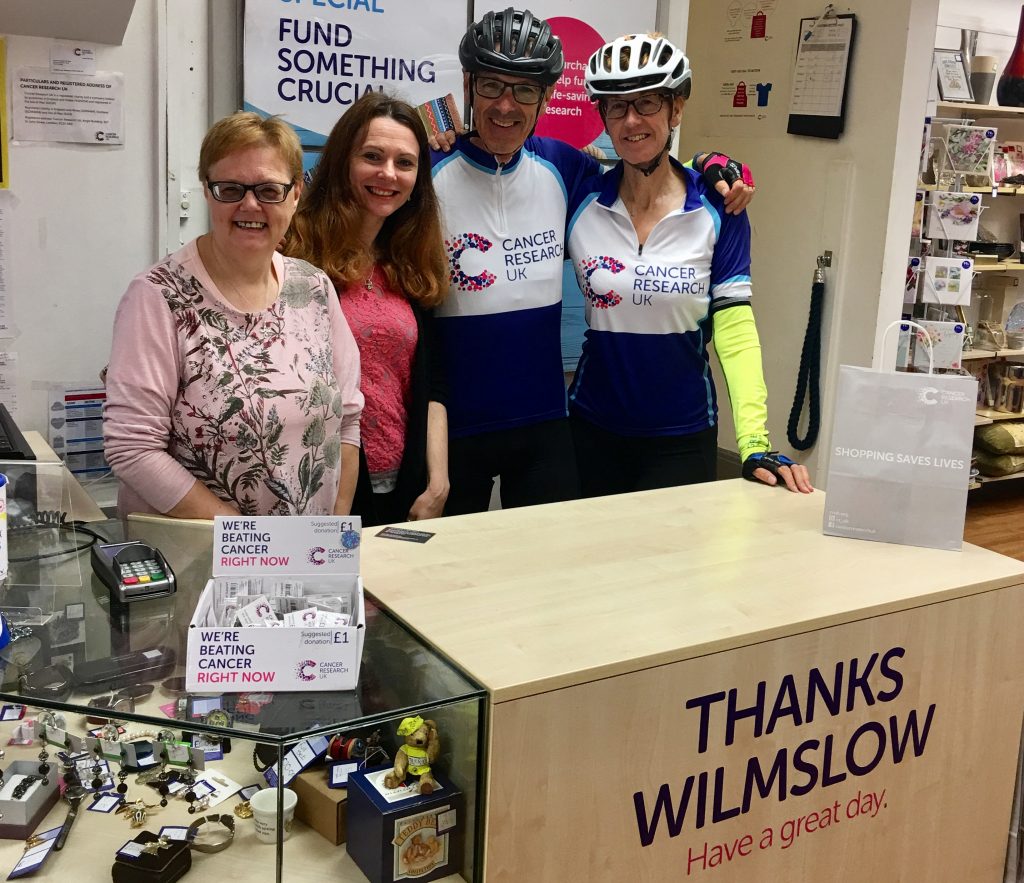 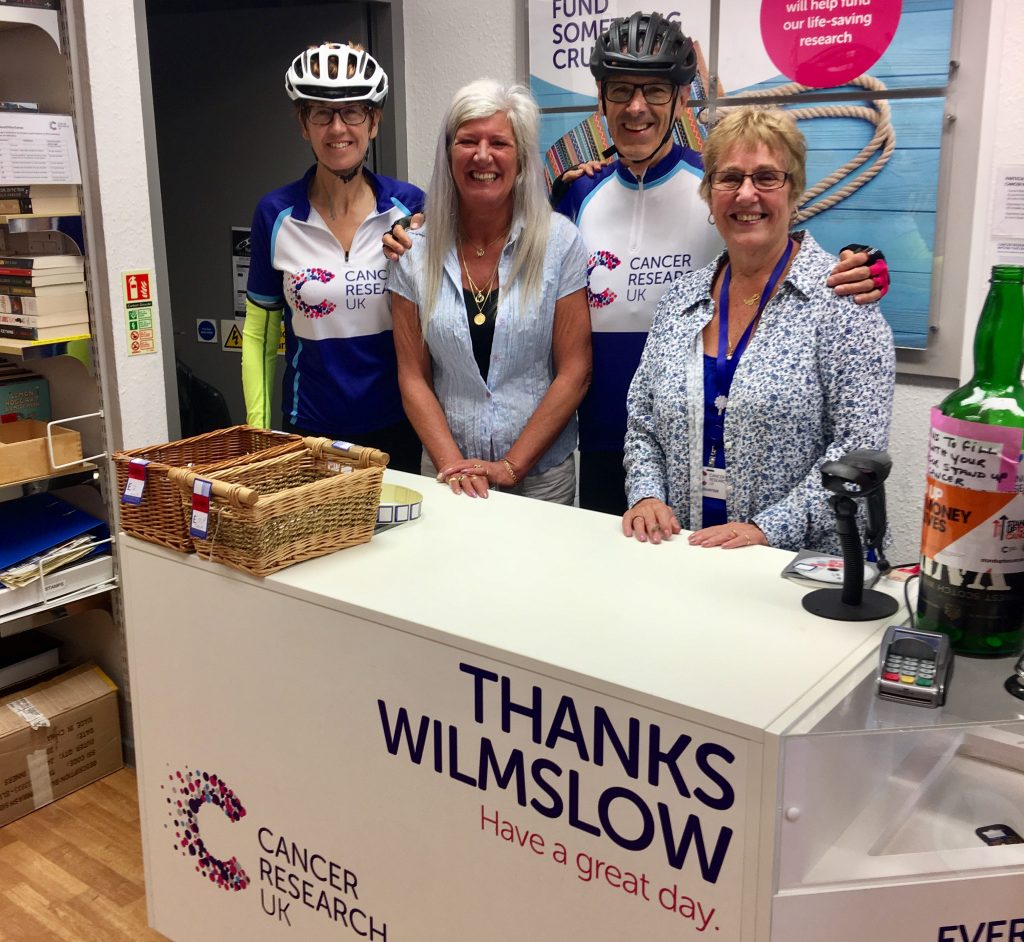 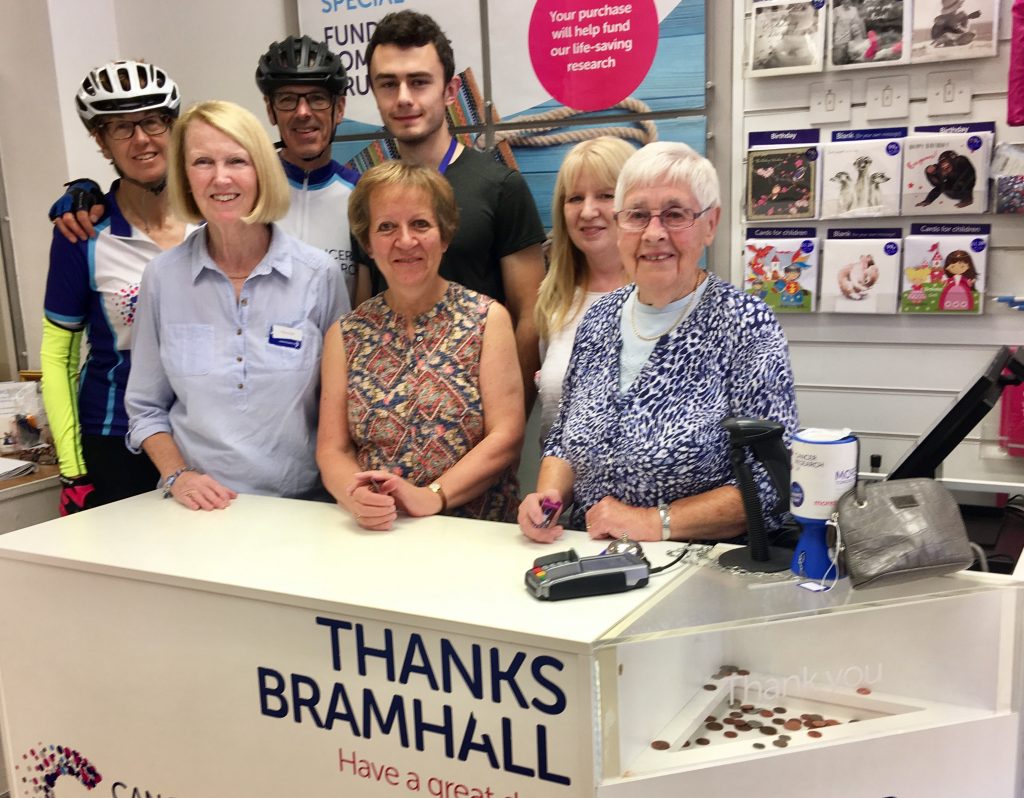 Key Fact – Until 1836 it was known as Bullock Smithy 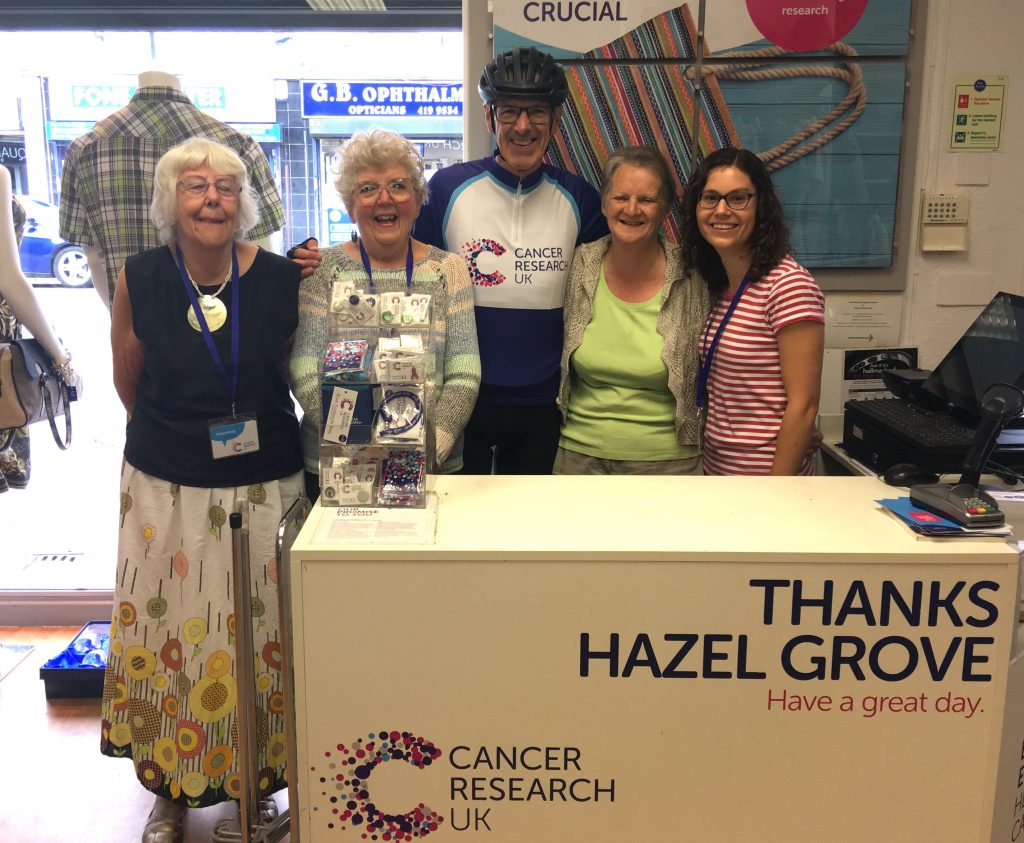 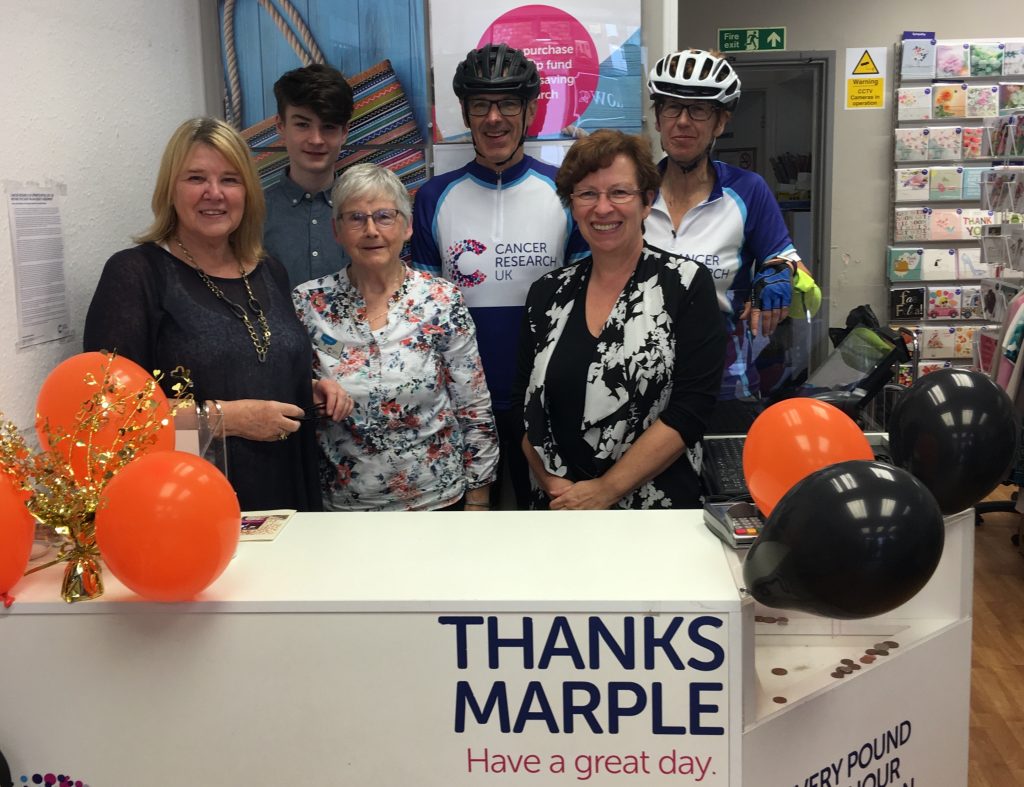 Key Fact – There were around 6 million hats exported from Stockport 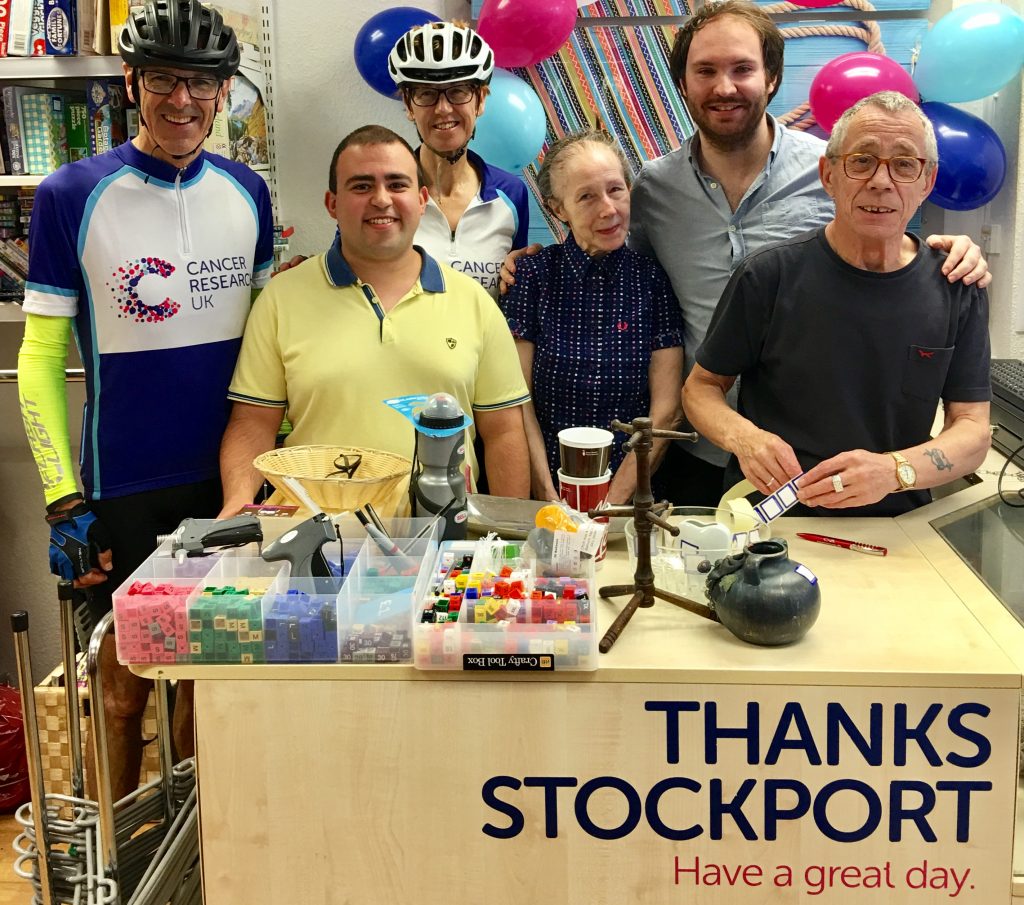 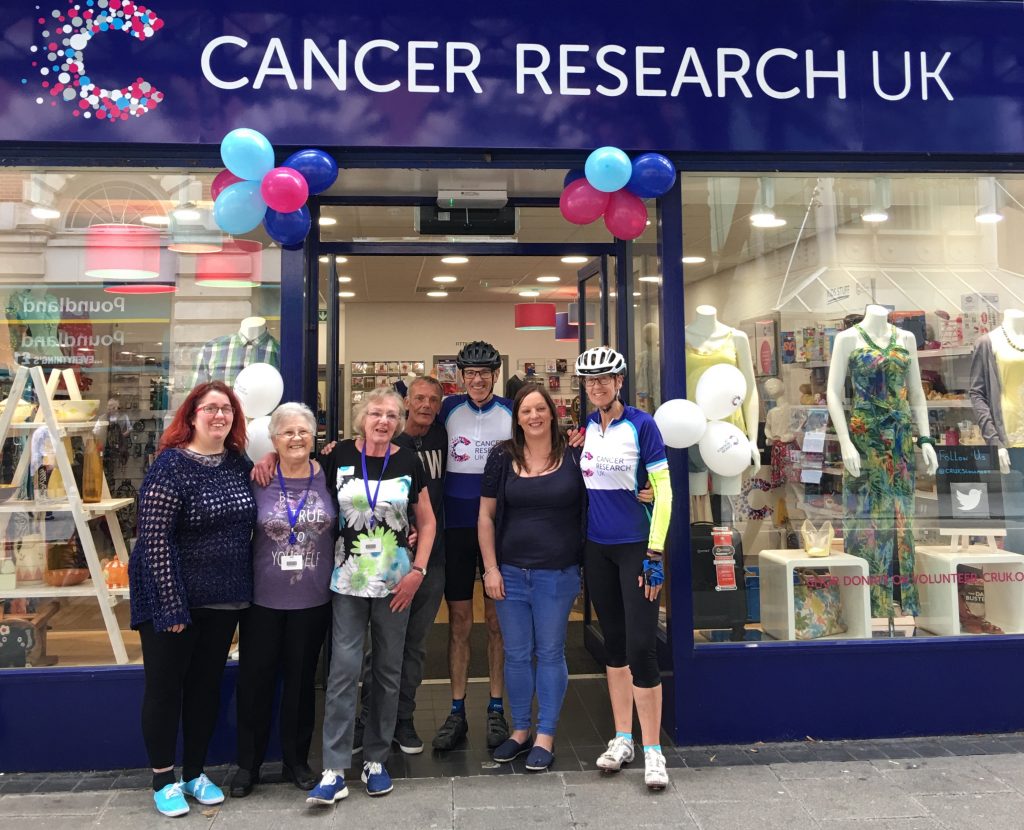 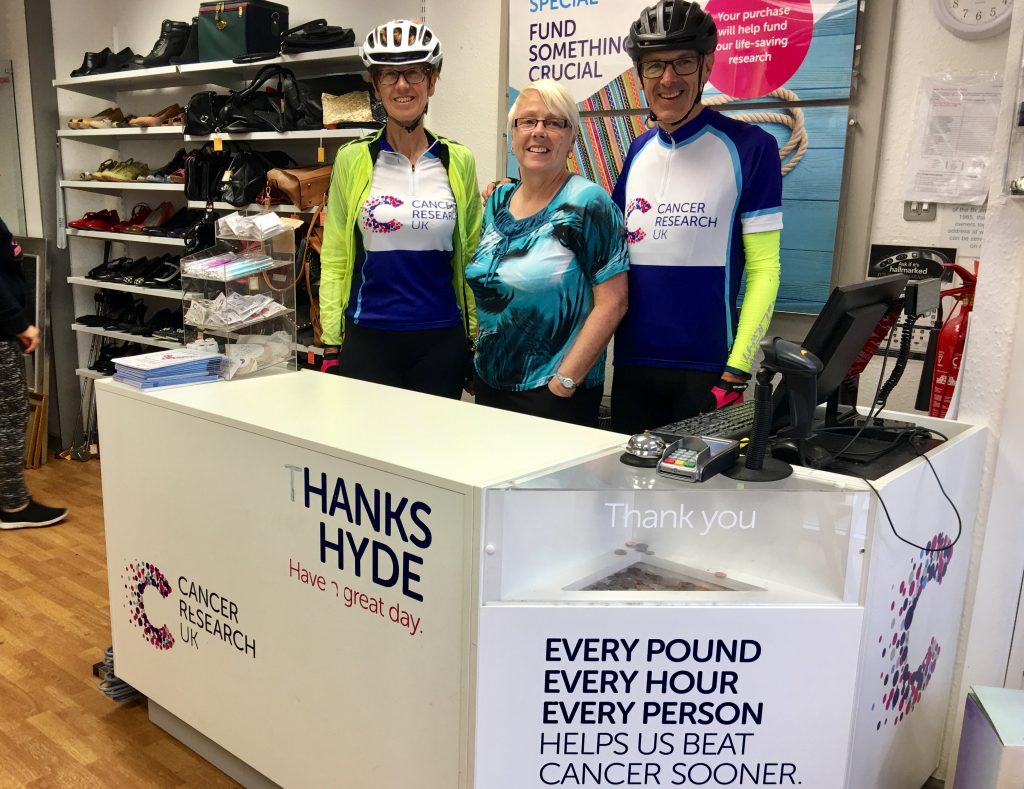 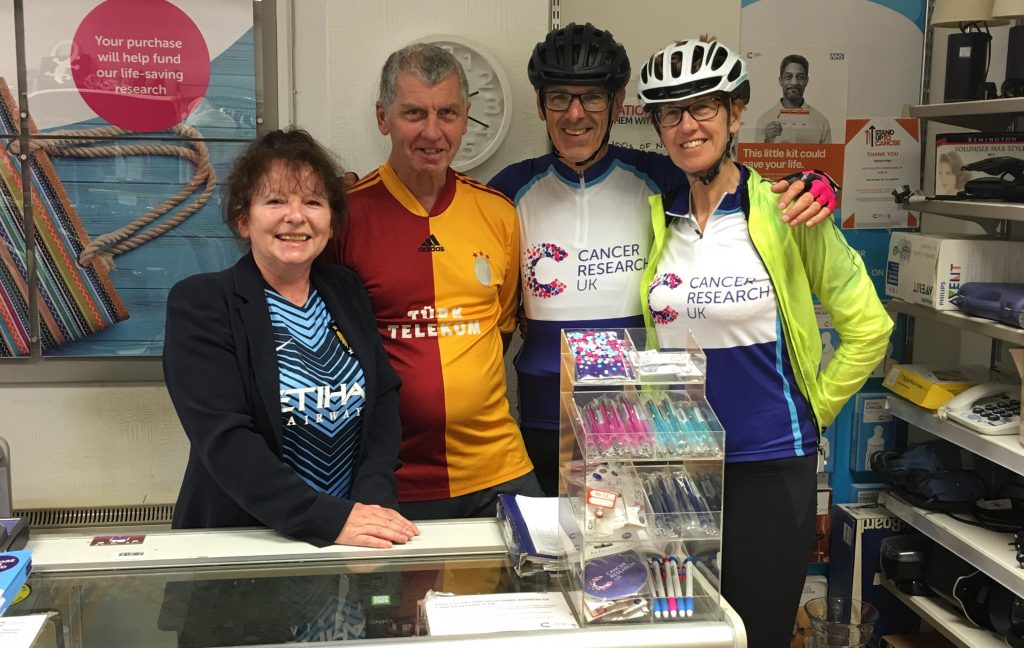 Key Fact – In 1882, the Ashton Moss colliery had the deepest mine shaft in the world 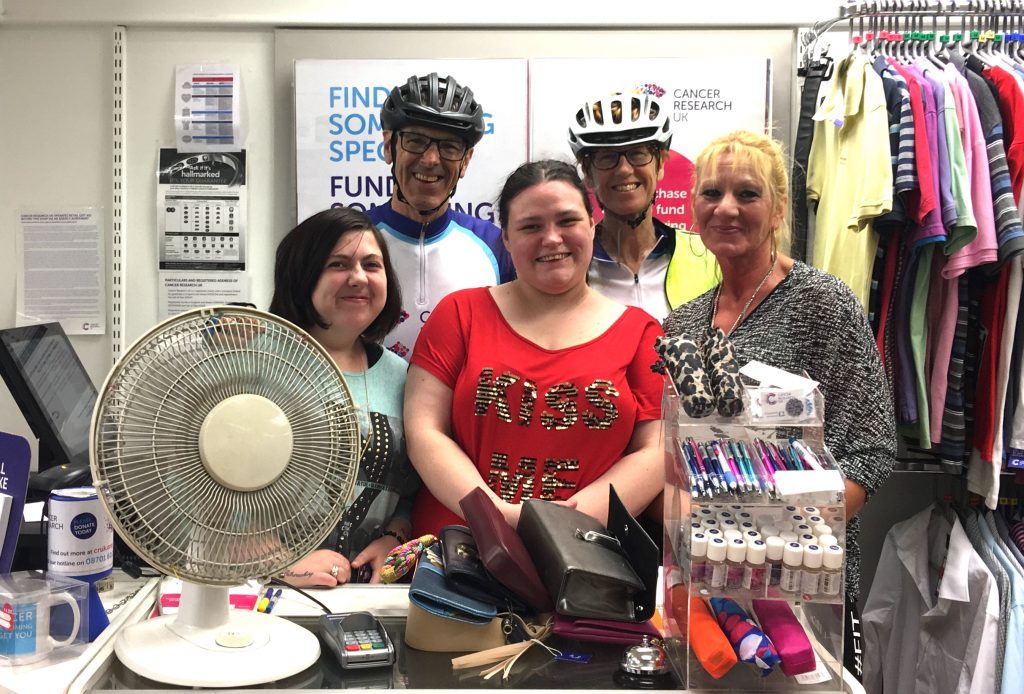 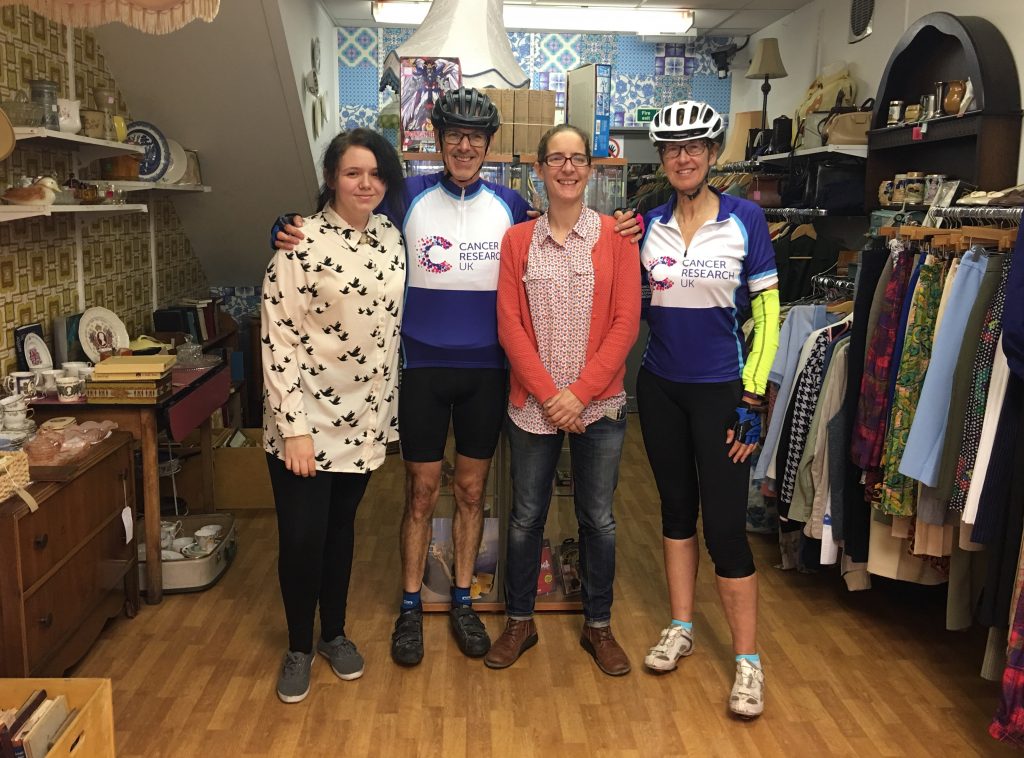