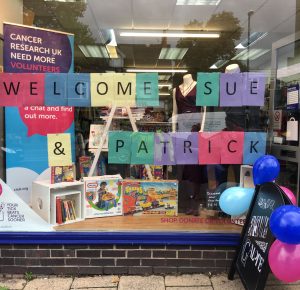 The rain we experienced yesterday, continued overnight and through to the morning. However, the forecast did look as if things were going to improve. We decided waterproof jackets were once again required and sunglasses weren’t. Our shoes had not completely dried out from the previous day, but the hairdryer and bath towels had improved them significantly.

Today was a BIG day for us – the day the we had most shops to visit (13). It would be a race against time as we needed to get to our final shop in Bulwell before they closed at 5pm. It was unfortunate that Bulwell didn’t have the 5.30pm  closing time of most other CRUK shops. The schedule had our arrival time as 4.40pm, so we had 20 minutes to spare. Our credit card size, laminated cards, with summary information for each day had proved invaluable. We regularly checked the addresses, miles to next stop (and in addition I had been obsessed with checking if we were on schedule). Gerry the Garmin (satnav) had been supplemented by Patrick’s I-phone and Google maps, as yesterday SMW1 (aka Jackie) had managed to buy a device to fix it to Roberto’s (Patrick’s bike) handlebars in a waterproof (essential) cover.

As we left the Premier Inn everything looked grey and miserable and wet. In Peter Kay’s words “It was that rain that wets you”. 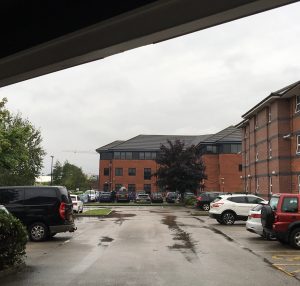 Our first 2 shops had DE1 postcodes i.e. were in the middle of Derby. we were expecting city centre navigating challenges and so left with plenty of time to cycle the 3 miles to the first shop. The route was clearly marked on Gerry the Garmin and took us on a pleasant cycle route along the River Derwent. Patrick commented that we’d probably arrive before the shop opened, as we pedalled in a leisurely way. After a couple of miles we expected to be leaving the riverside and heading into the city. We stopped to review all navigation tools we had and discovered we’d been cycling in the wrong direction along the river! Aaaaaaaargh. Our very tight schedule was messed up right at the beginning of the day. The leisurely approach we’d had a couple of minutes earlier vanished. We pedalled furiously back to where we’d started on the river path route and then onwards. We arrived at the shop 30 minutes later than our schedule and very muddy. 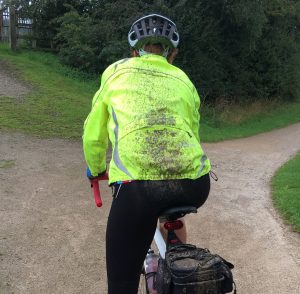 For the rest of the day we were chasing our tails. Once again it was lovely to be greeted with such enthusiasm and warm welcome from the staff and volunteers. We’ve seen such a huge amount of pride, commitment and enthusiasm since we started and today was no exception. We enjoyed the time today (albeit limited) chatting with everyone in the shops and have huge admiration for the work they do.

In between the shop visits the cycling was frantic. We were pedalling as fast as we could to try and catch up time, but faced numerous challenges. Traffic lights were frustrating. If they were on red for road users ,we’d dismount and run (yes, run) across the road. Part of our route was blocked, but there were no diversion signs. 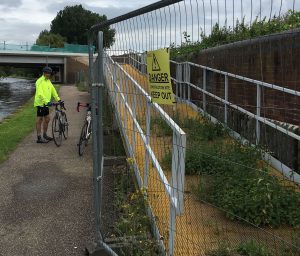 We had tram tracks to cope with in Nottingham, as well as the ubiquitous pot-holes and general uneven surfaces 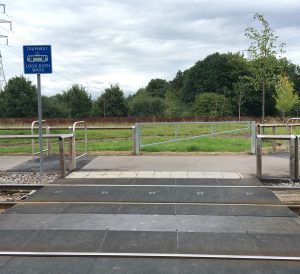 We ended up running through shopping centres and pedestrianised precincts. Cycle shoes, made this sound like a horse was galloping through.

At one stage we were almost 50 minutes behind schedule, but did manage to capture some time back and left our penultimate shop in Arnold, with 20 minutes to reach the Bulwell shop. We pedalled fast and furiously, at times running across roads with Rubes and Roberto. At one stage Gerry led us on a short cut through a housing estate and down a track. The narrow track, which was at the side of a terrace of 1960’s houses, had a dog turd at its entrance, which we swerved to avoid, as we pedalled down. Unfortunately we ended up in their back yard. We realised the ‘real’ track was 10 yards further back -we missed it.More haste less speed.

We finally spotted the Bulwell shop with Jackie and her balloons, along with Dawn the manager and one of her volunteers waving at us.When we explained that we’d been rushing all day to get to them, Dawn advised that their opening hours had changed a few weeks ago and it was now 5.30pm!

In addition to the welcomes from the shops, it was great to meet some friends and family at the shops. Thank you all for making the effort.

Step daughter Rachel joined us at the shop in Beeston 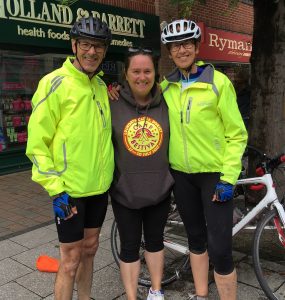 One of the great patient advocates, Derek and his wife, Pat, joined us at the Lister Gate shop. 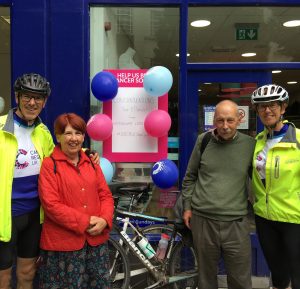 AJ welcomed us (along with Jackie at the shop in Sherwood. 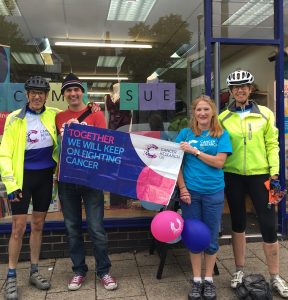 SMW1 (Jackie) as well as providing us with everything we needed, also helped out a customer today. Betty,88, a very regular customer in West Bridgford, bought a doll’s pram with 2 dolls for her great grand daughter age 2. Jackie provided a taxi service to Betty’s home. Thanks for the donation, Betty!

Having reached Bulwell, our journey was not over.We had another 17 miles to reach our accommodation in Belper. The adrenaline I’d had all day disappeared as we left Bulwell and I just wanted to click my fingers and arrive at Belper.If it wasn’t now already Thursday, I’d describe the frustrations on this journey, but sleep is now desperately needed!

And now, once again, the stars of the show, the CRUK shops, along with Patrick’s key facts for the places we’ve visited today 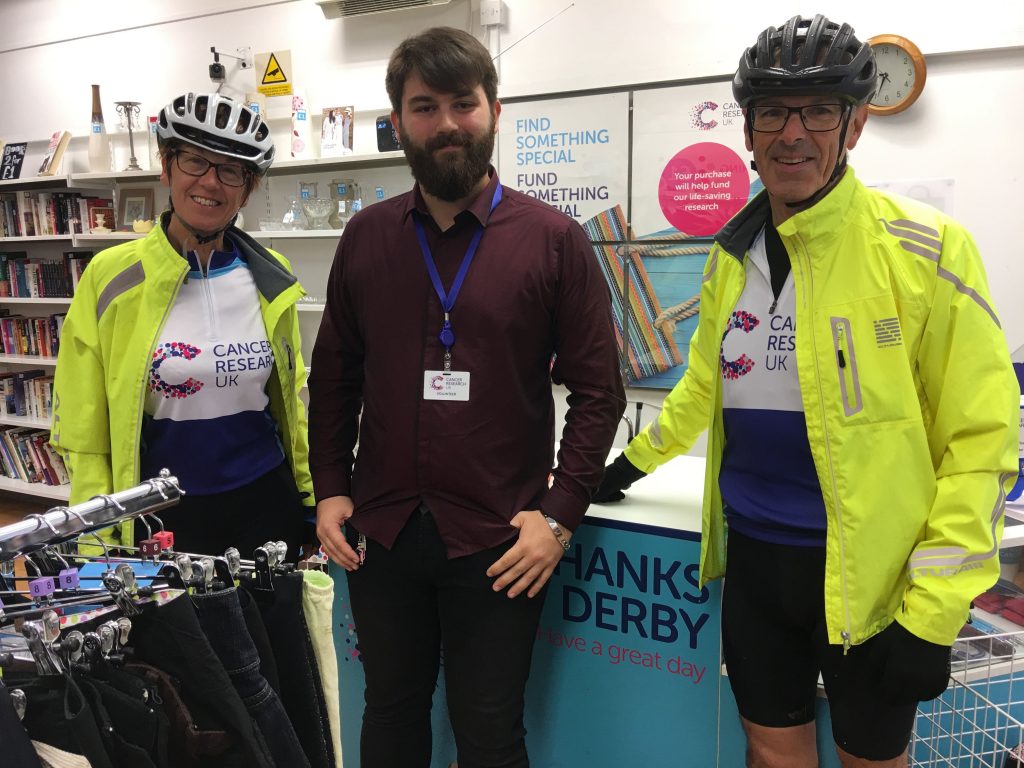 Key Fact – The pioneer of modern nursing , Florence Nightingale was from Derby) 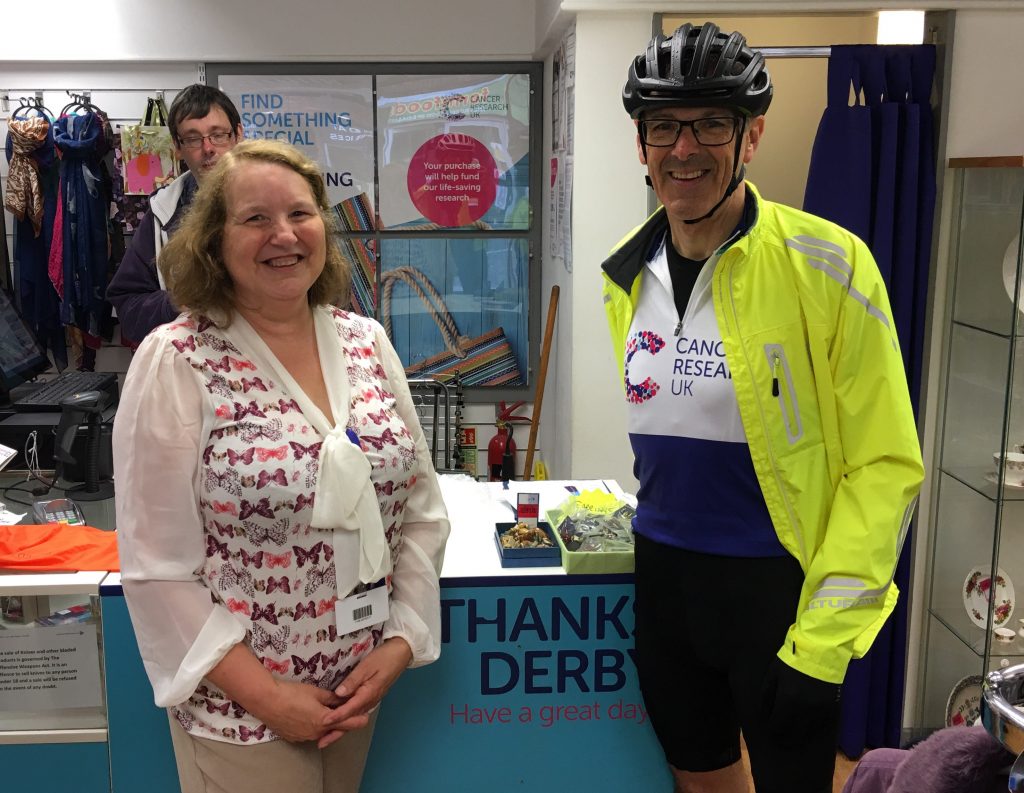 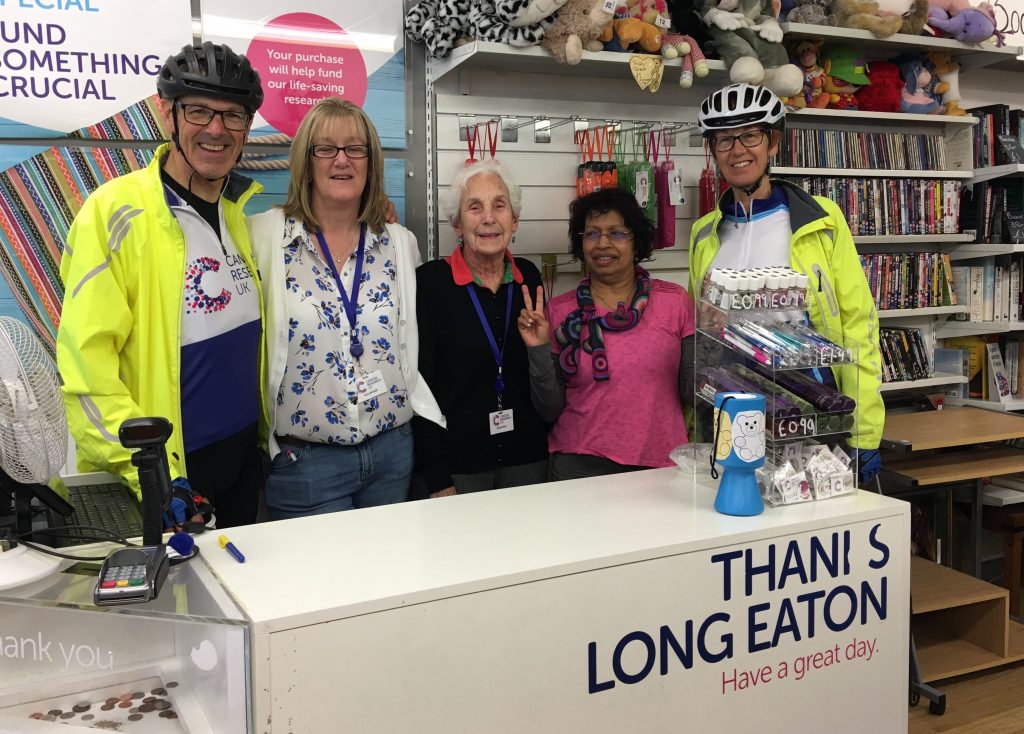 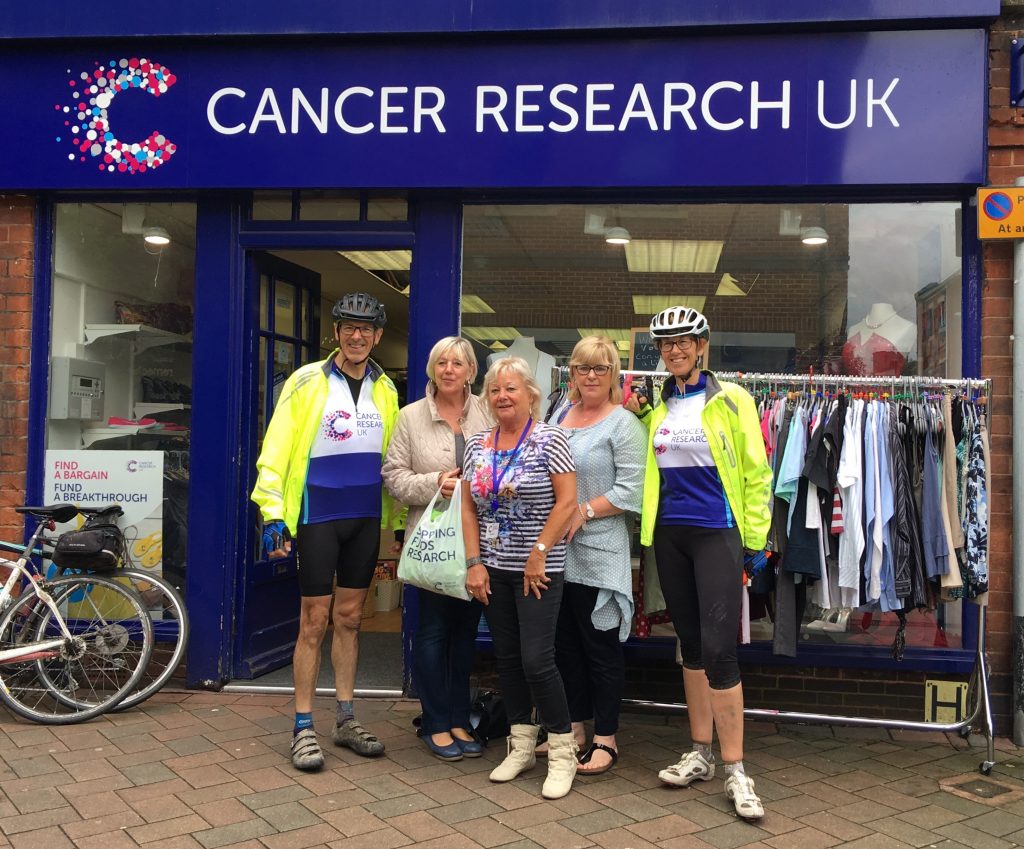 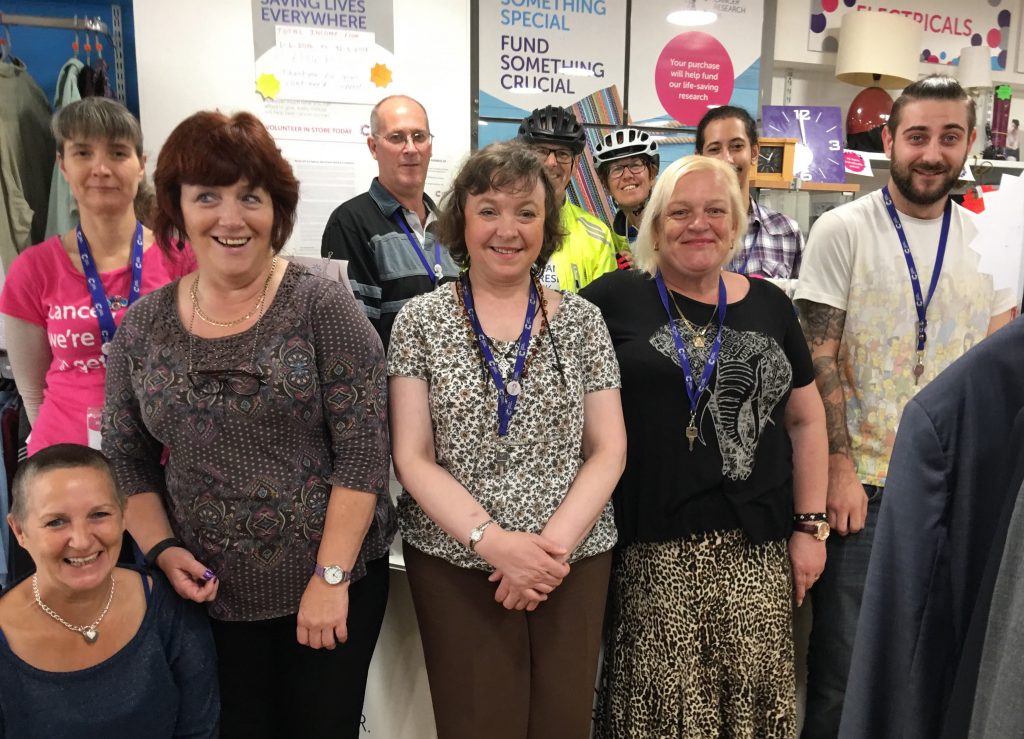 Key Fact – The video recorder was invented in Nottingham in 1957 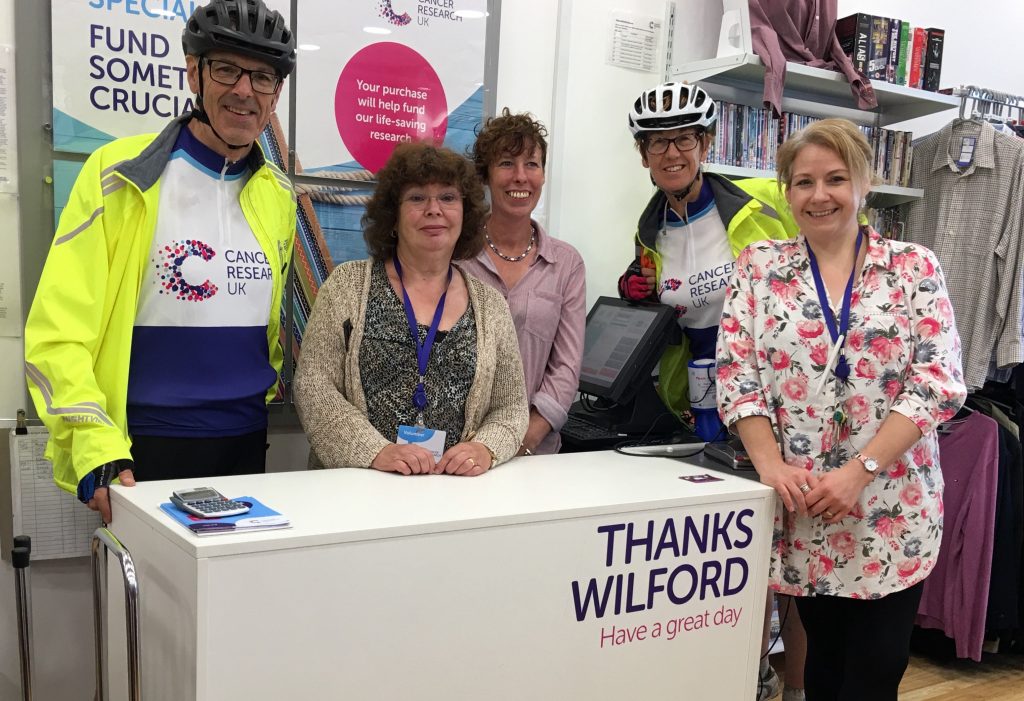 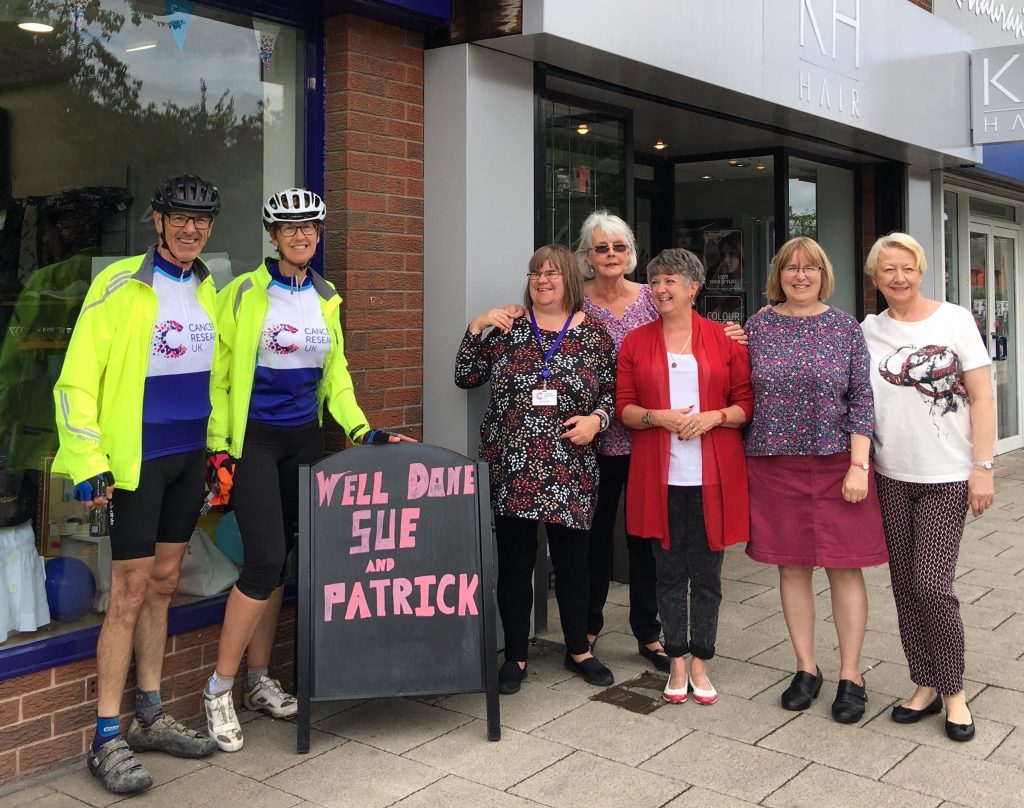 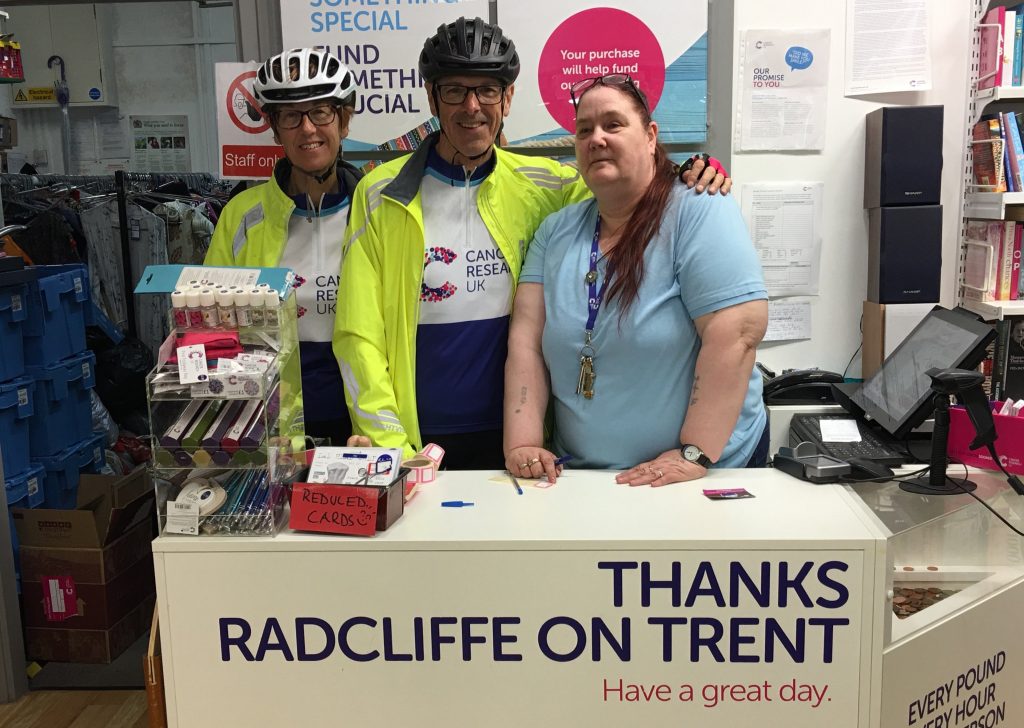 Moo (Mandy) #ValueForMoney. Thanks for the photo Laura 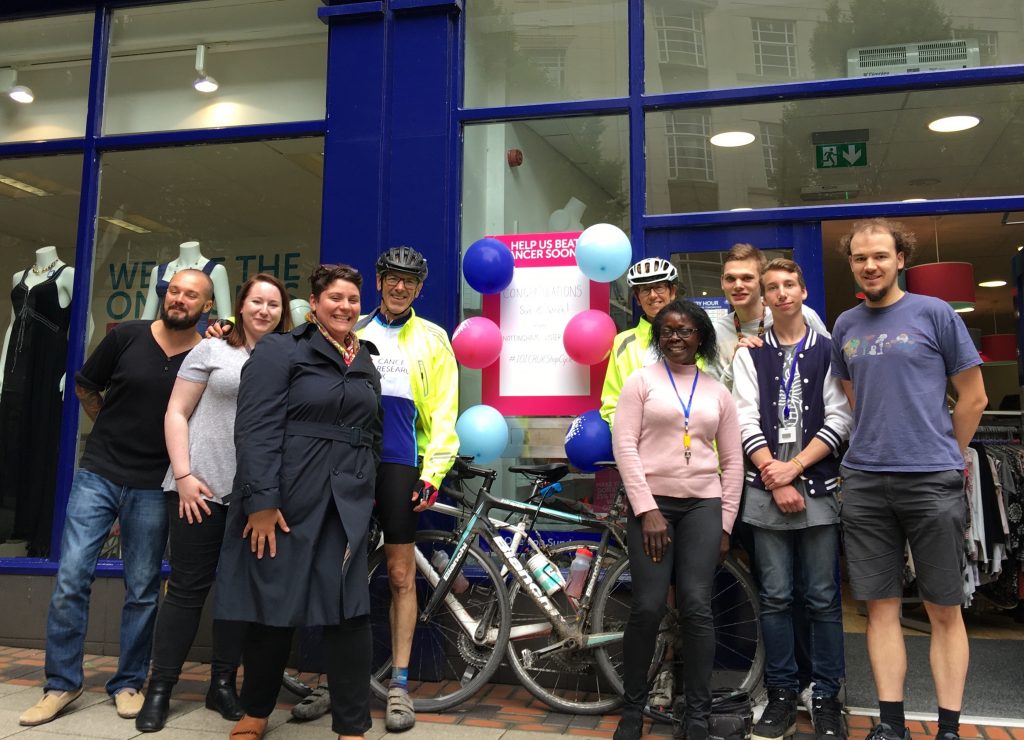 Key Fact – The Screen Room ,with 22 seats is the smallest public cinema in the world 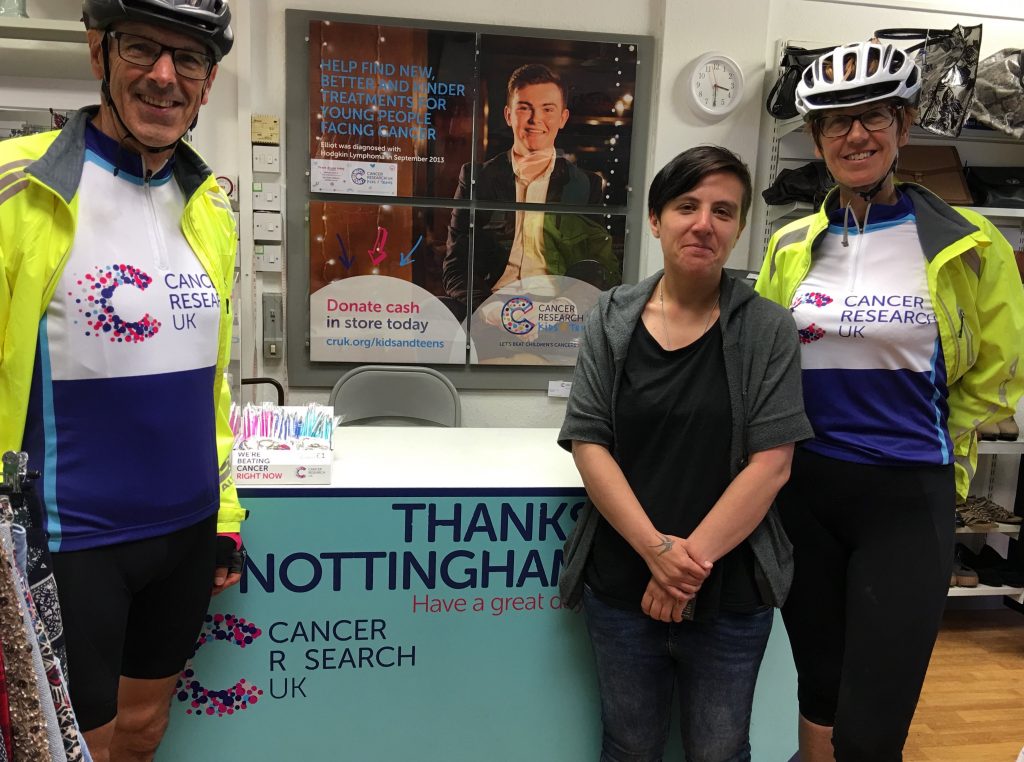 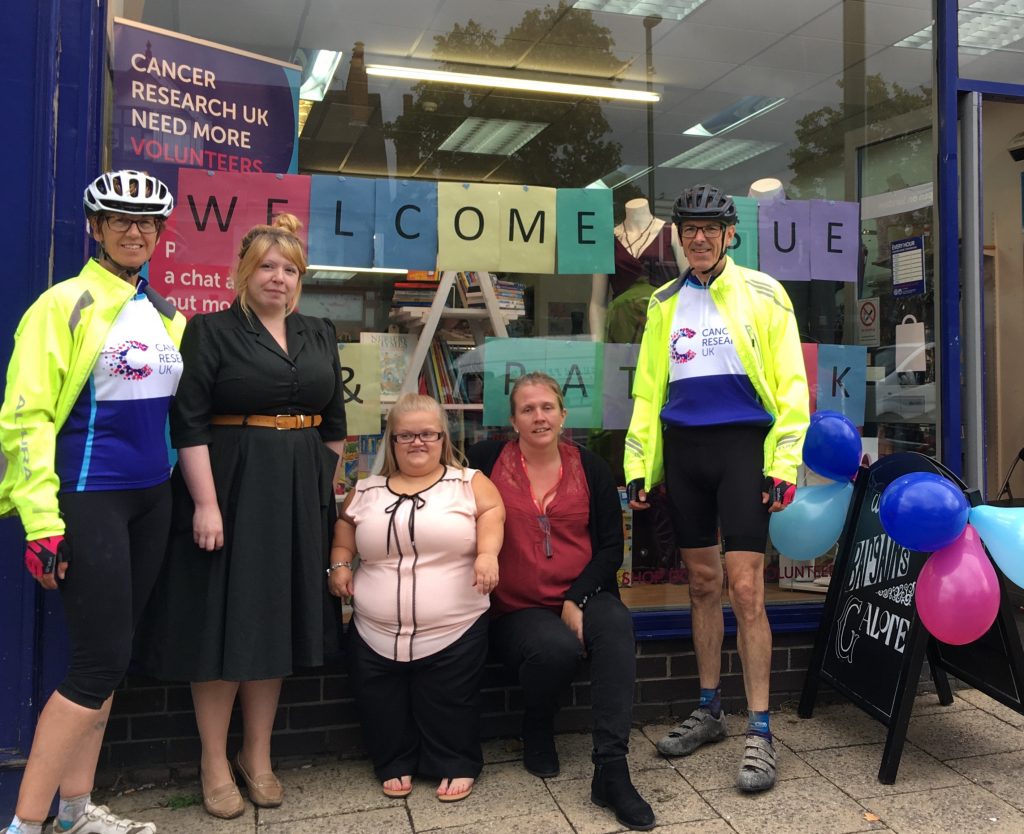 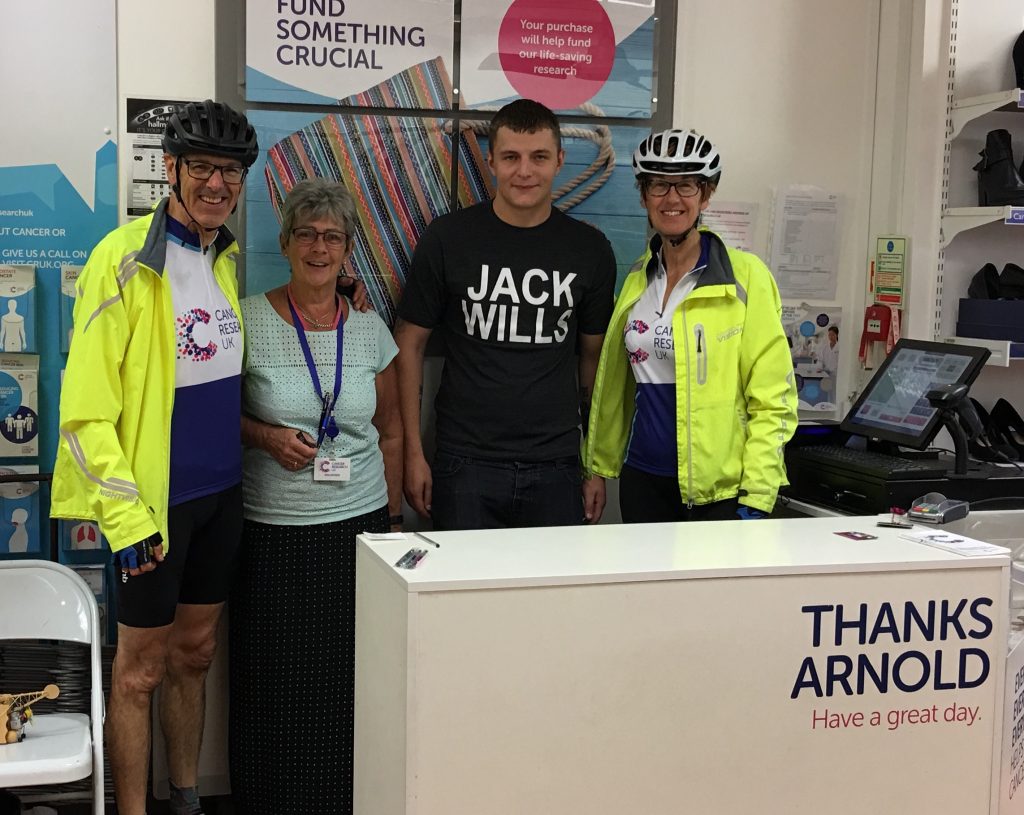 Key Fact – The wonder drug ibuprofen was developed in Nottingham’s by Dr Stewart Adams, whilst working at Boots 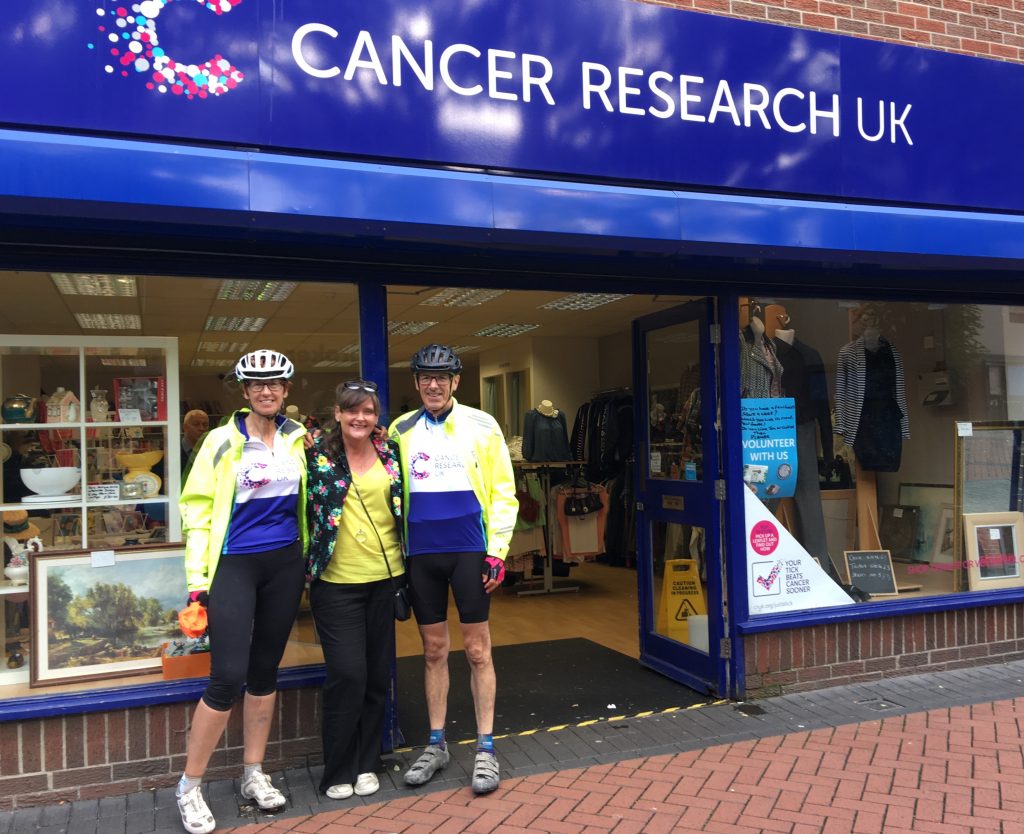