Cold and wet, but warm welcomes 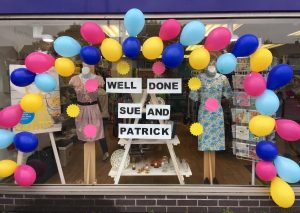 I awoke at 6.24, before Bruce (see blog on day 1) rang out at 6.30. I got out of bed to turn Bruce off (no socket by the bed to plug phones in overnight) and then looked at the weather forecast on my phone. It didn’t look promising. It didn’t sound good either as the rain was beating against our hotel window. 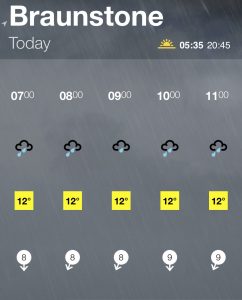 Having completed the tasks in our early morning routine, we went down for breakfast to discuss the day ahead with Support Manager Week 1 (SMW1), our friend and absolute hero, Jackie. No Premier Inn breakfast this time, as the Hilton in Leicester had very generously provided 2 rooms free of charge including breakfast. Jackie and Patrick reported that their omelette and poached eggs were cooked to perfection. The staff during our stay had all been helpful. My initial concern with this venue had been how we managed to get there on a bike. It’s situated just off J21 on the M1, which I’m very familiar with as a driver and I couldn’t imagine how you could easily cycle there 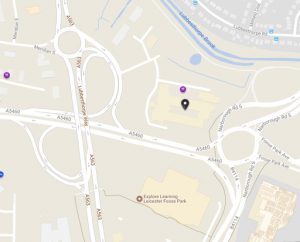 However, when we approached from a cycle route down the Narborough road yesterday evening, we were pleasantly surprised by the cycleways with traffic lights, which allowed us to cross the streams of traffic during the evening rush hour. It did take almost 15 minutes as we waited for each set of lights to turn green. We decided to abandon the standard entrance to the hotel site when we spotted a hole in a hedge which saved us waiting for another couple of sets of lights. 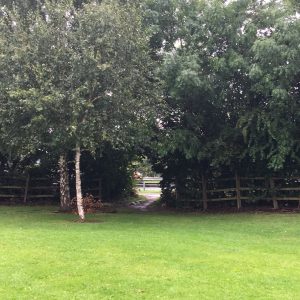 We decided our sunglasses and lightweight, windproof (and slightly showerproof) jackets were not needed today and instead donned our ‘waterproof’ jackets. The downside of wearing a jacket of any kind is that it hides the CRUK branding on our bodies. However, needs must.

Our first shop today was in the centre of Leicester. We exited through the hedge and this time, the numerous traffic lights were on green. A positive start to the day. On reviewing our route last night, we’d decided to use a cycle path rather than risking the multi-lane highway which was the obvious route for cars. Having moaned about cycle paths in previous days’ blogs on this trip, we take our hats off to Leicester. The path was a smooth, tarmac surface, with no brambles, overhanging nettles or tree roots which had disturbed the integrity of the surface. We’d envisaged some challenges negotiating our way in the city centre, but reached shop #1 without any problems and just before they opened.

Having had a chat with the manager, we then successfully navigated our way, safely out of the city and on towards Loughborough. During this 13 mile journey, the rain was constant and heavy. I felt cold and wasn’t sure the arms of my jacket were sufficiently waterproof to cope with the conditions. Patrick’s hands became numb from them being cold and wet. We arrived at the shop dripping and making a mess over the floor (this was a feature for most of our shop visits today). At Loughborough Patrick went to use the ‘facilities’. After some period of time he hadn’t emerged and Christina was getting worried about him ( I did wonder if the curry from the previous evening was creating problems). I went to check and discovered that his hands were so cold and numb that he hadn’t been able to get his clothes off. This was later resolved, as SMW1 scooted off to buy him a pair of winter gloves with fingers.

We’d been offered food and drink by the shops many times over the last 5 days and we’d generally declined as we needed to zoom off to the next shop to make sure we got to the last shop of the day before they closed. However, today things were different, we needed some comfort and accepted tea, biscuits, and even plum crumble with cream (thank you Ena for that).

Having left one of the shops when the rain was particularly torrential, we spotted a Costa down the street and decided to have coffees – one decaff flat white and one ‘normal’ flat white, along with a piece of carrot cake (why do those working in coffee shops,  use the term ‘normal’ for caffeinated coffee, suggesting decaff is abnormal?). 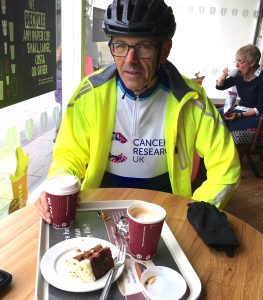 We made good time from Loughborough to Ashby and then onto Swadlincote, despite the weather. Having left Swadlincote, we made a quick visit to a General Practice nearby where a friend of ours, Paula (known as Binkie Canoe on Facebook) works. We had a chat with one of the GPs, Dr Hari and nurses Michelle and Tracy who cycle and run. Its good to see GP staff practicing what they preach about healthy lifestyles and exercise. 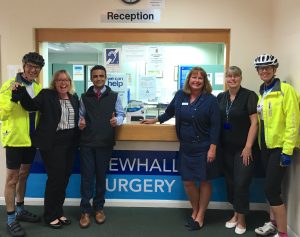 Next stop Burton, where we loved the cycle route into the town via this bridge. 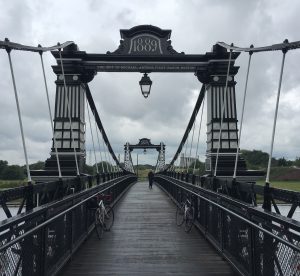 Then onto Derby. At the half way point we stopped to have a protein bar by this power station at Wellington. It looked particularly eerie on this grey miserable day. 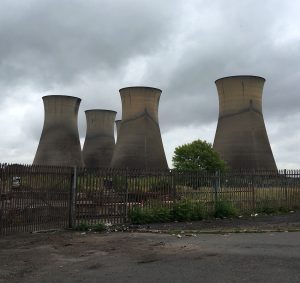 There’s a significant cluster of CRUK shops in both Derby and Nottingham and today we visited 2 of them.

Once again the staff and volunteers in the shops made us feel very welcome and really lifted our spirits when the weather conditions were against us for most of the day. It made us feel really good to either be welcomed by staff and volunteers cheering us in the street as we cycled towards them, or to arrive in the shop and someone would cry “The cyclists are here!”. We were particularly impressed by the balloons at one of the shops and the window display which included a bike loaned from the bike shop round the road, Mercian cycles.

By the time we reached the Premier Inn, Stanier Way we were filthy and wet but feeling great. Our shoes may not dry out by tomorrow morning, despite the use of a hairdryer and packing them with each end of a bath towel. However, in the big scheme of things, damp shoes will be just a minor irritation 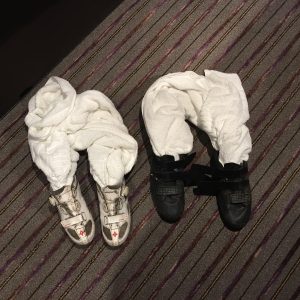 And finally, onto the stars of the show, the CRUK shops. Plus quirky facts from each town that my researcher (Patrick) has discovered. 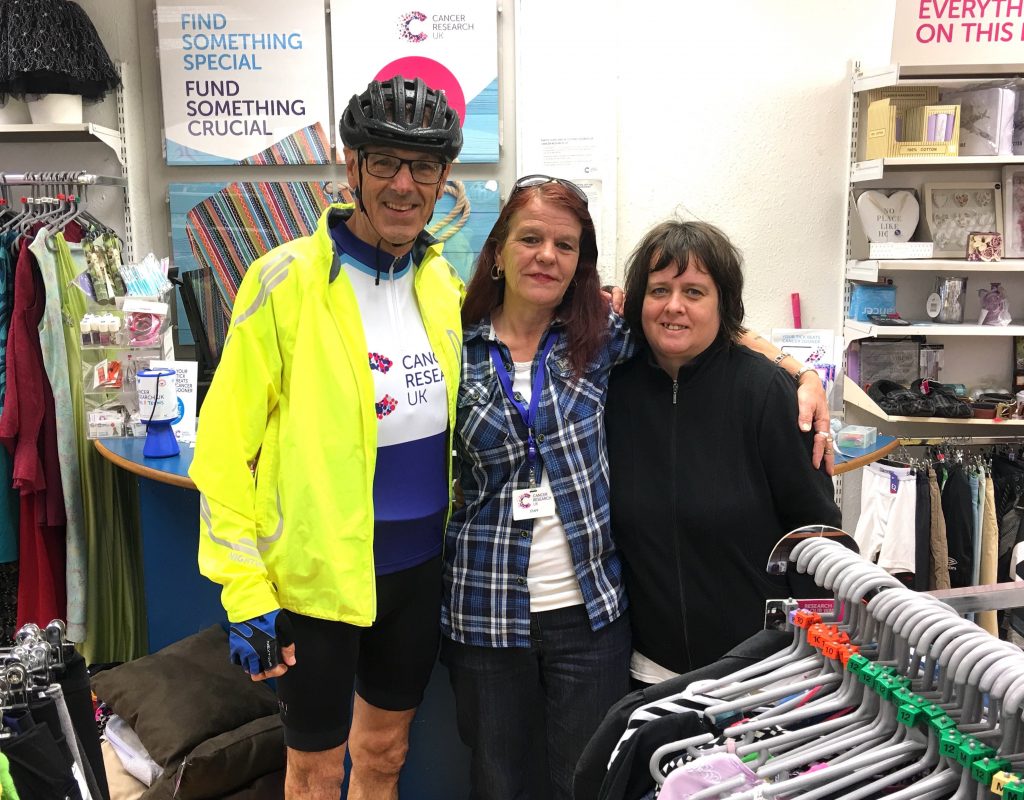 Key Fact – In 1841 this was the destination for the world’s first package tour by Thomas Cook, for a temperance group from Leicester 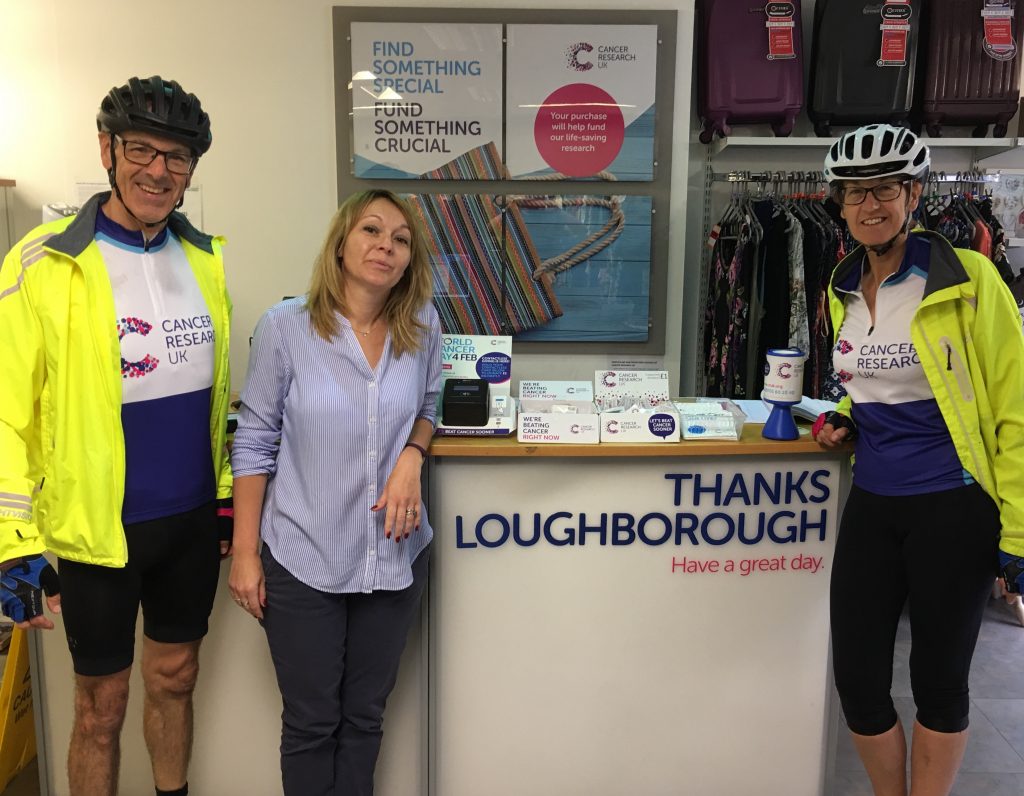 Key Fact – the 1946 song by The Merry Macs, included the lines ‘If you wanna smooch and be as happy as a pooch, go to Ashby de la Zouche by the sea’ . Ashby is as far from the sea as is possible in England 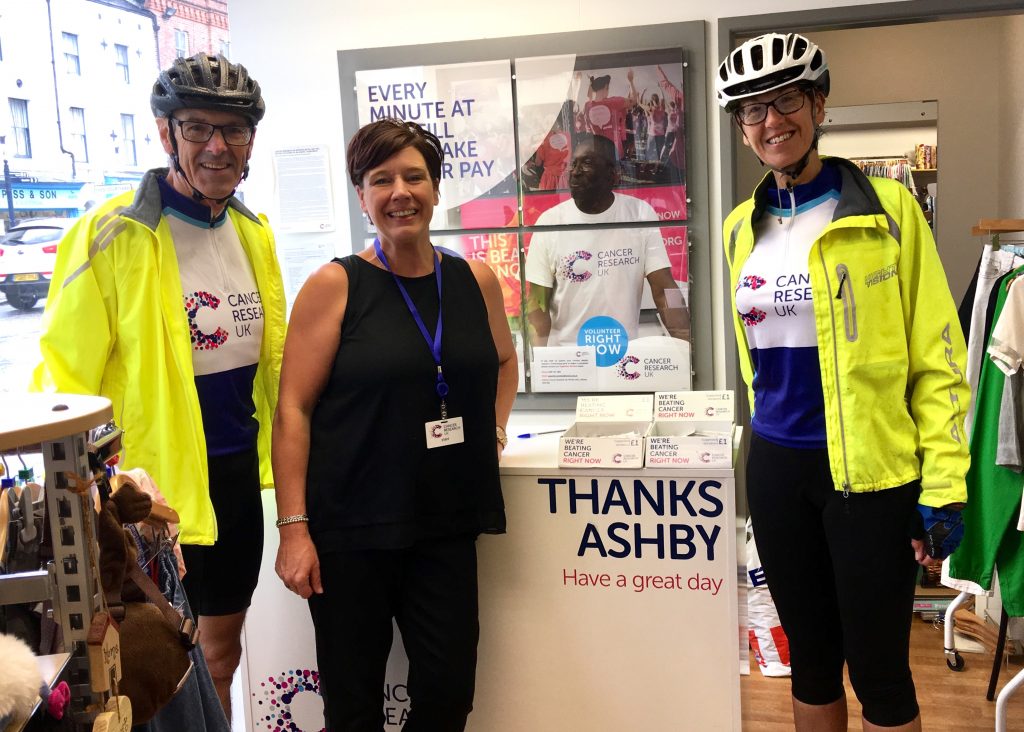 Key Fact – John Hurt , the actor, lived there as a child, as his father was a vicar in the town 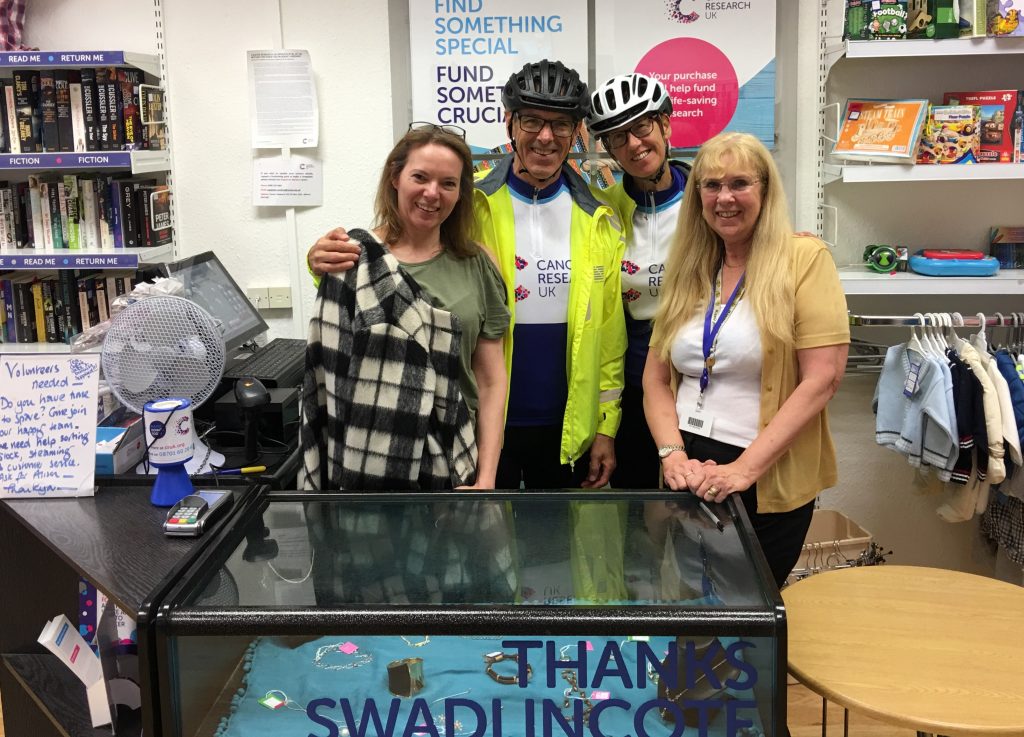 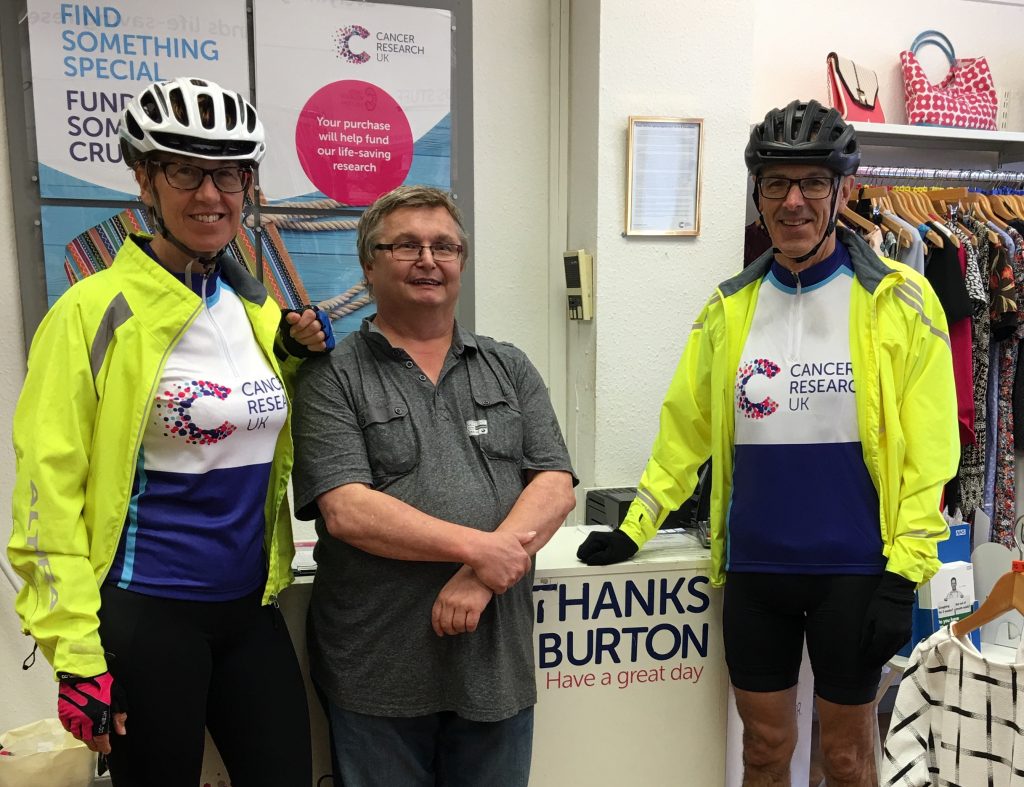 Steve was looking after things today as Brenda (manager) was covering in Ashbourne. It was great to speak to you on the phone whilst we were in the shop Brenda. Sorry, I forgot to ask for your 3 words!

Key Fact – The home of rolls Royce is here 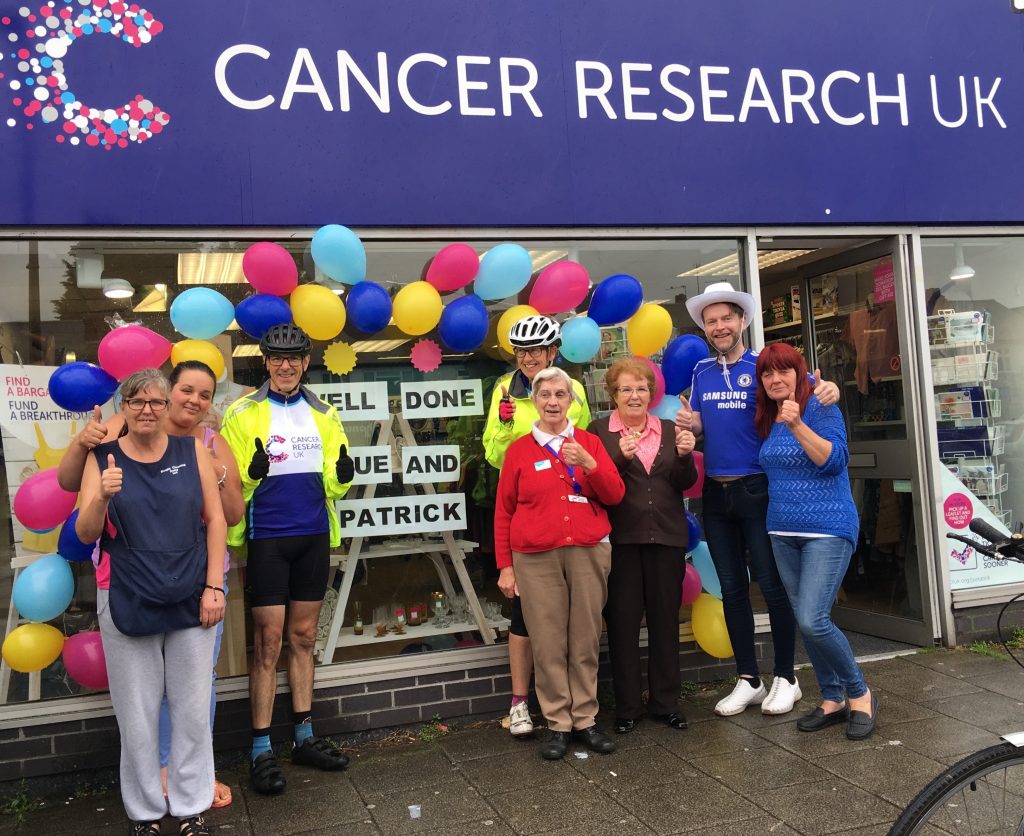 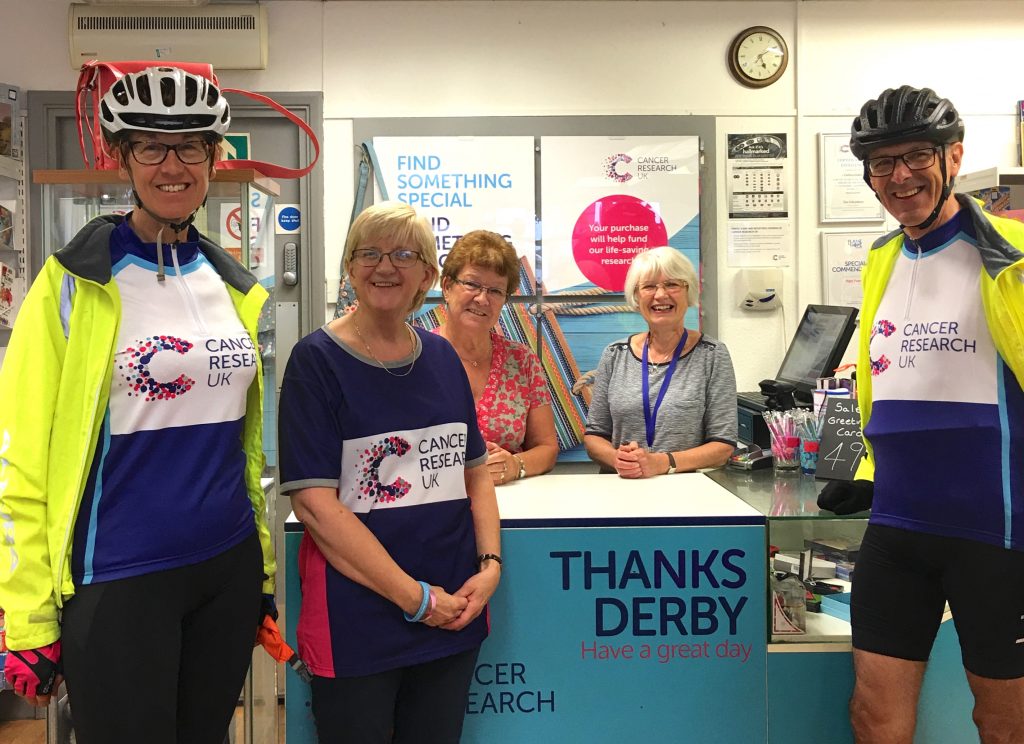 Debbie (manager) with Linda and Chris. Thanks for taking the photo Tony! Debbie described the shop in 3 words as #WelcomingSupportiveDiverse