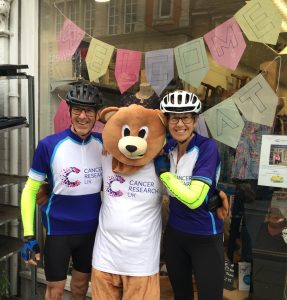 With 2 Premier Inn breakfasts under our belt, we were familiar with the fare that was offered. Unfortunately, St Neots, Great North Road, Wyboston didn’t come up to scratch in several areas – no muesli was available (the delivery hadn’t arrived), the fruit bowl consisted of melon and grapes (only 2 grapes, we snaffled them) and the coffee was only available in jugs (no cappuccino). However, the poached eggs ordered by Patrick and SMW1 were deemed to be very good.

With bags packed, we pedalled off to the shop in St Neots which was just a couple of miles down the road. We had no problems finding this one, as we’d spotted it the previous evening when we’d left the environs of the AI, to have dinner in town. All very straightforward , so off to Rushden. It was quite a long slog – a quarter of our cycle miles for the day with the wind providing some resistance. We were delighted when we reached the shop that the welcome party included Can Bear (see above)

Our journey to Kettering was going well, until we approached the town centre – Roberto reared as he passed over a  pothole and Patrick ended up on the floor. Thankfully he suffered no significant injuries , just grazes which savlon soothed. We managed to leave the town with no further significant events.

By now we were 30 minutes ahead of our schedule, which I’m constantly monitoring. We took some quiet country roads for most of the journey to Corby. When we saw a sign advising there was a diversion, we ignored it, assuming it was possible to get through with Rubes and Roberto. We travelled for a couple of miles, gradually climbing a hill. We stopped at the top, planning to reward ourselves with a 9 seed bar and water, when a cyclist appeared up the hill from the direction we were planning to go. Mark, the cyclist was from Wellingborough and advised there was no way through as the tunnel under the A43 was closed. The 3 of us looked at the page I’d ripped out of the AA 2017 Large Scale Road Atlas, to plan an alternative route. Gerry the Garmin is useless in this situation. This added more than 4 miles to our journey and by the time we’d decided which route we’d take and then back tracked ,we lost most of the time we’d gained.

SMW1 had full branding (banner and balloons) as we arrived at the Corby superstore. Always a welcome sight! 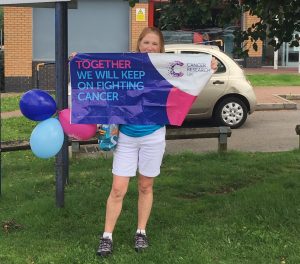 Market Harborough was our first stop in Leicestershire. By now we were beginning to feel tired. As always the shop motivated us to keep pedalling as we pushed on to Wigston. The countryside was very attractive and we passed through some interesting villages. 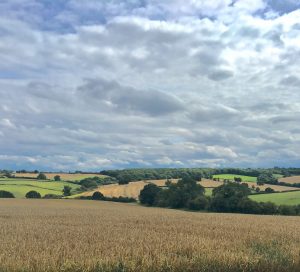 By now every slight uphill was noticeable, but somehow we managed to keep our pedals turning to reach our final shop of the day in Wigston. As usual, our support vehicle was adorned with 3 balloons. SMW1 advised that a policeman had given approval for parking temporarily on double yellow lines. I do like flexibility with rules and regulations. 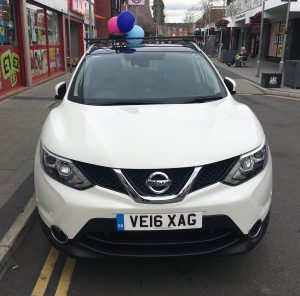 Today has been a day of contrasts – cycling along the A6 vs cycling down single track roads, working towns vs villages, a cool, grey morning which turned into a bright, sunny afternoon

Gerry the Garmin, along with the navigator behaved impeccably today. None of the navigator’s frustration of yesterday. So, as midnight approaches we feel tired, with rears that are beginning to feel slightly uncomfortable,but in good spirits, ready to take on day 5

And now for the CRUK shops (plus my researcher’s key facts – there’ll be a test at the end of the last blog on these!) 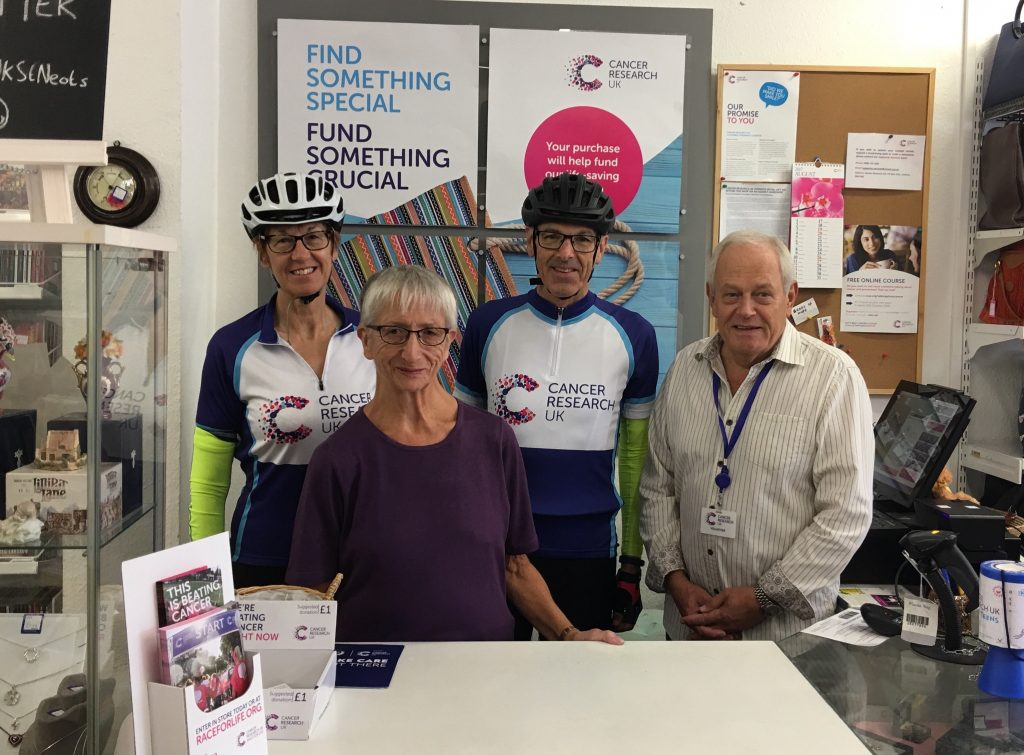 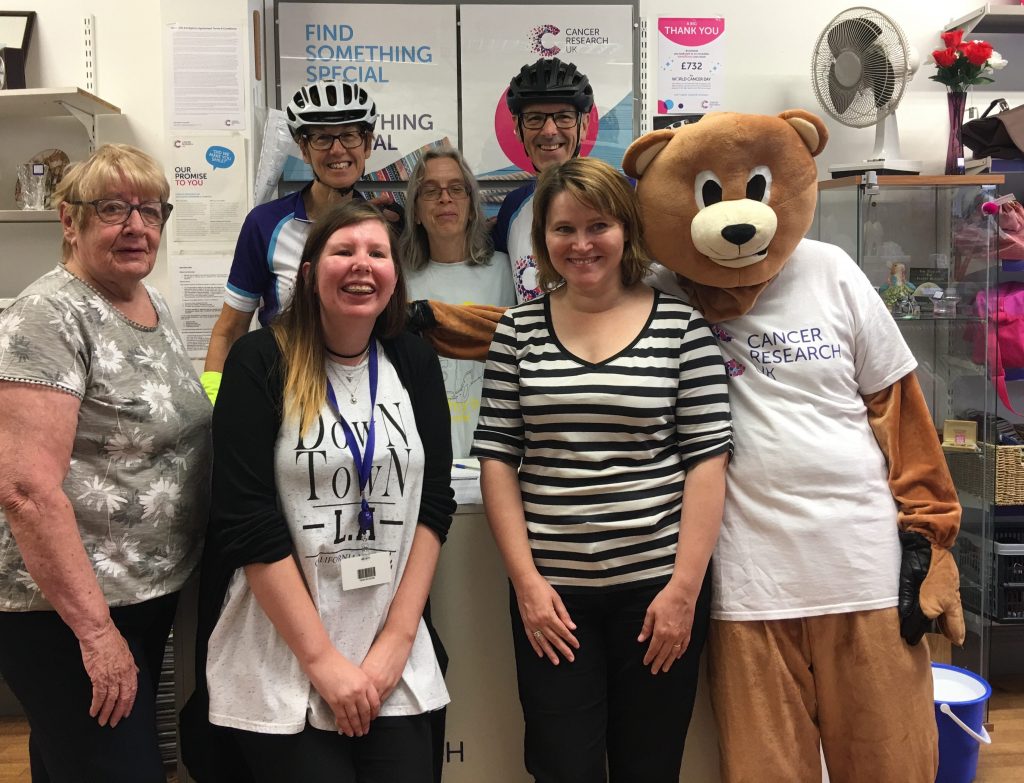 Jo (Manager) with volunteers Bernice, Rene,Zoe and Can Bear. Jo described the shop in 3 words as #CosyFriendlyWelcoming 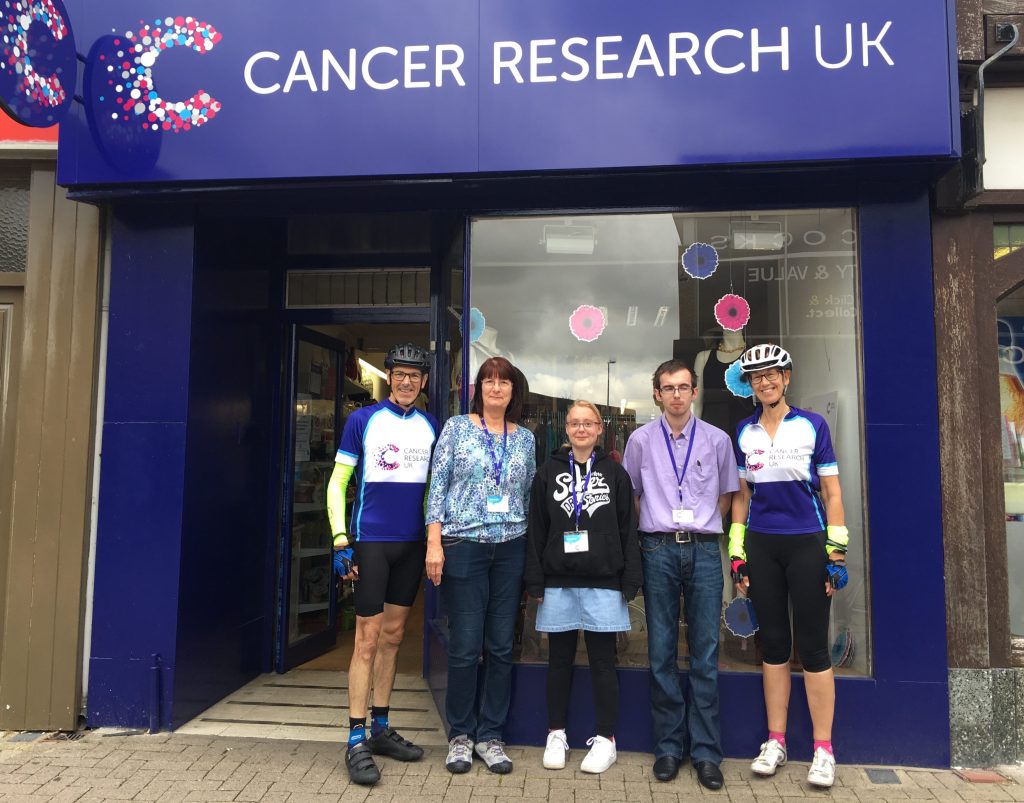 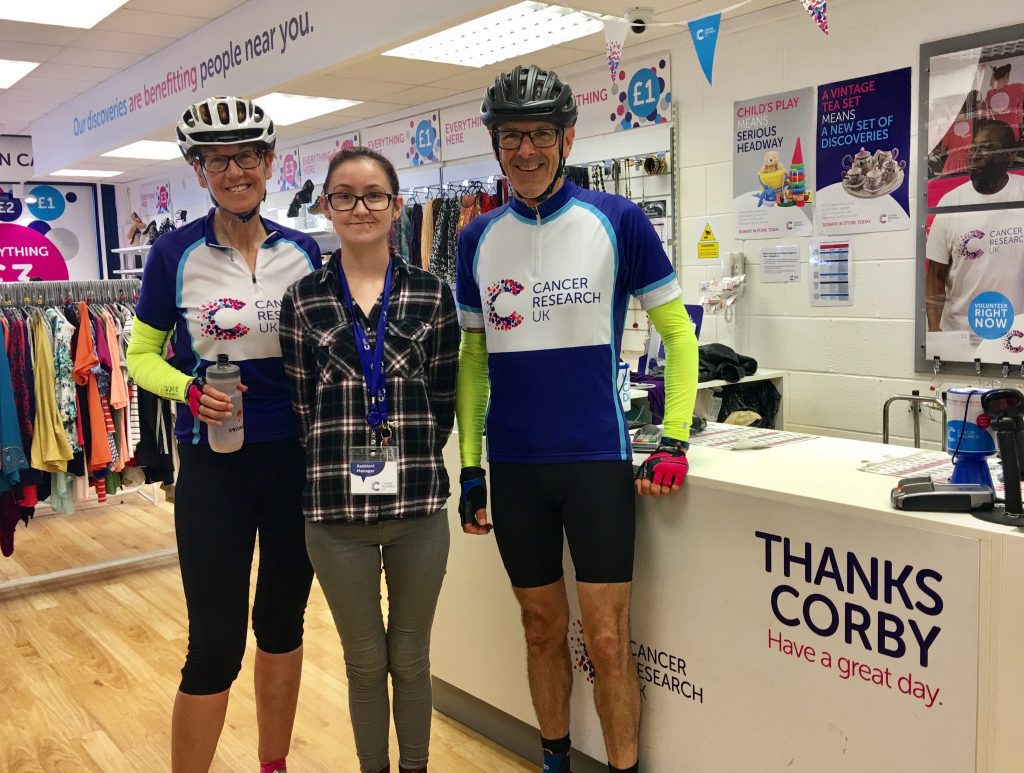 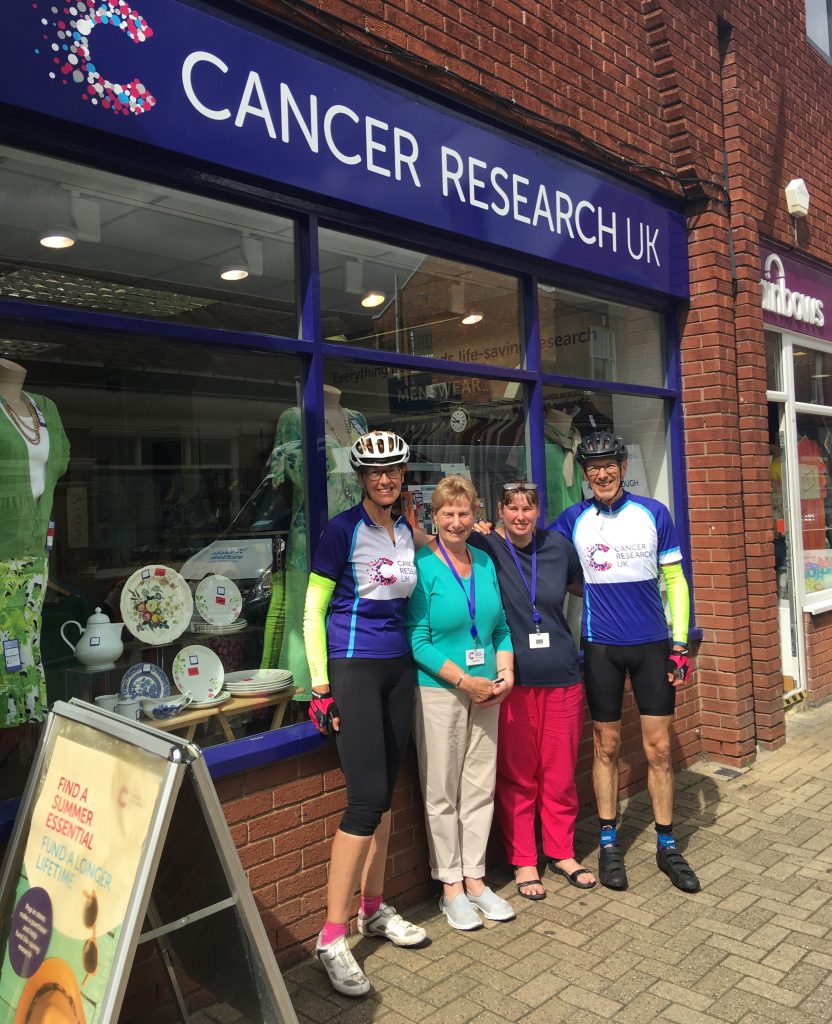 Key Fact – Both Wigston was developed in the late 19th century by the owner of the brickworks, Orson Wright, following the tradition of establishing model towns such as Port Sunlight and Bouneville 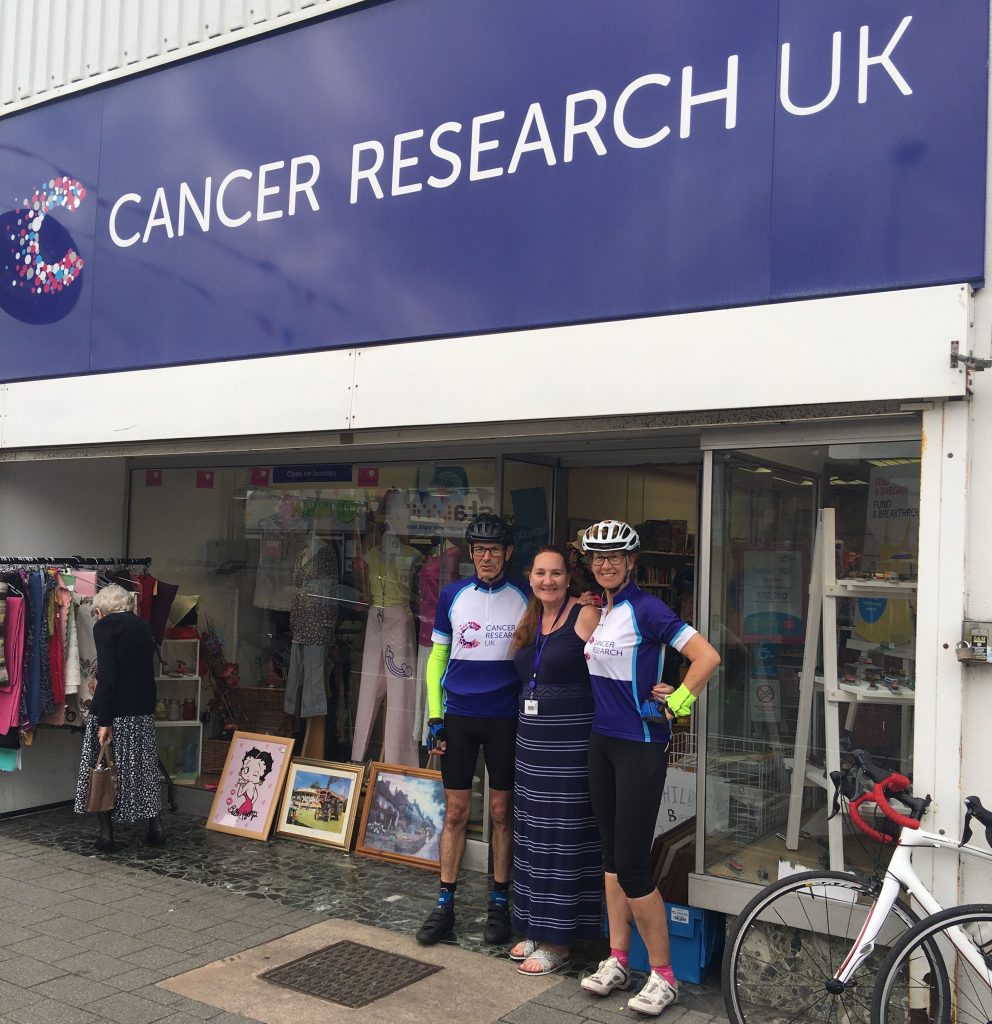