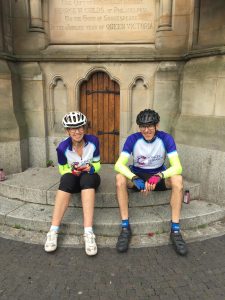 We awoke at our 10th Premier Inn in the last 12 nights.Today was the last full day of our cycle ride. We’ve been lost many times over the last couple of weeks, but one of the worst times for us is getting out of the Premier Inn and on towards our first shop. The siting of these hotels on major road intersections, with big roundabouts can provide a challenge early in the morning. Gerry the Garmin (satnav) advised that our first CRUK shop was only 6 minutes of pedalling away, on a retail park adjacent to our accommodation. To help us further, we’d asked the receptionist on Tuesday evening, what the quickest route was on a bike. She’d been very helpful and told us about a short cut, giving us a whole set of verbal instructions which involved going to a roundabout, down an alley, up a ramp, through Morrisons car park and to look out for the Card Factory. By this morning, neither of us could remember the detail, other than Morrison’s car park was involved. We pedalled 50 yards and then decided to check if Google agreed with Gerry.Whilst we musing over which direction we were currently pointing , a white van pulled up to a set of locked gates and the driver spoke on the intercom. It was John the CRUK driver, on his rounds delivering/picking up stock.What a great start to the day! We tailgated him and he led us to the back door of the store just another 75 yards away. It had taken us less than 2 minutes. 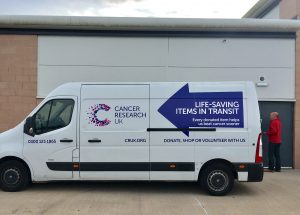 With one shop under our belt, we set off for the shop in the city centre of Coventry. Surprisingly, we managed to find it without getting lost, staying ahead of our schedule. Who should pop up whilst we were speaking to the manager, but John the Driver.

Support Manager Week 2 (Jo), who had grown up in Coventry, was keen to show us the cathedrals which were only a few hundred yards away from the shop. Neither of us had visited the city and we were impressed by how bombed out shell of the original cathedral was cleverly connected to the ‘new’ one. It’s a possible on the list of places to investigate  further at a later date. 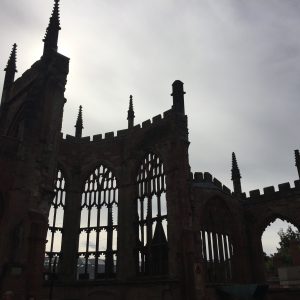 Coventry helpfully provided cycling subways to safely negotiate some of the large roundabouts. We noticed one that was directing us to Kenilworth. Great – that’s where we were going next. However, when wondering which exit to take, it was less helpful as the directions offered us the station and other key places in the city of Coventry, but no direction to Kenilworth. Crazy!

When we reached Kenilworth, we took a rather circuitous route to the shop. The benefit was we passed some beautiful buildings and the castle. Whoever decided on site of the castle didn’t appear to have much of a strategic vision – it was at the bottom of 2 hills. I thought castles were usually built at the top of a hill to offer some additional protection 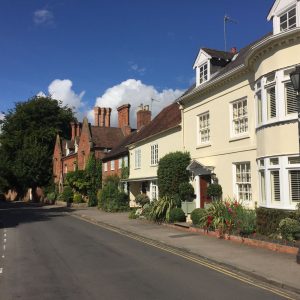 We did eventually get to the shop and who should be there, but… John the Driver. 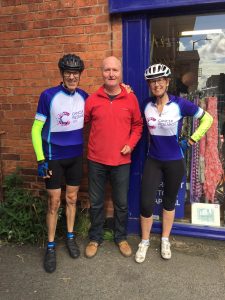 John told us that his next stop was Leamington Spa. When we arrived at the shop there was a van parked outside with goods in plastic bags. I decided to stow away in John’s van. Unfortunately, it wasn’t John’s van at all! 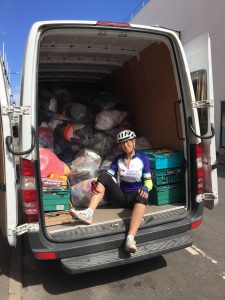 When we went in the store and John told us that he was about to head back north to Birmingham, I was disappointed. So there’ll be no more of John popping up in this blog 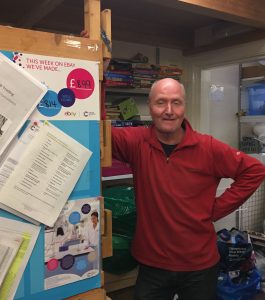 Our day so far had been straightforward. From Leamington Spa we headed off to Stratford. Thames Water – it would have been helpful to have a warning before reaching the lake at the junction! When we entered the city centre, pedestrians became the biggest hazard. Avoiding them became a challenge, as they threw themselves lemming-like into the road. Appropriate abuse was hurled by Patrick and I! 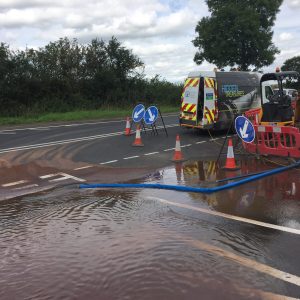 Having eaten a large Danish pastry provided by Jo in Kenilworth, it was now time for lunch (chicken and avocado sandwich, berry smoothie and fruit), which we ate sitting at the base of a monument that an American had given to the city on Queen Victoria’s jubilee. 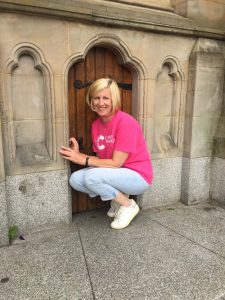 We were not looking forward to the final 25 miles and had procrastinated, subconsciously extending our lunch break. We were expecting a long haul, not because there were significant hills along most of the route, but with the wind blowing against us we were feeling pretty drained.We rewarded ourselves with 2 ripe blackberries 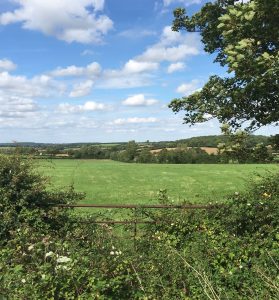 We were running on empty and the view of Edgehill, half a mile ahead of us, was daunting. Our spirits were already low and we doubted our ability to make it up this hill, given the physical and emotional state we were in. However, we dug deep and made it. This did have a positive impact on our spirits and we had the benefit of a long downhill sweep into Banbury and a visit to the final shop of the day. 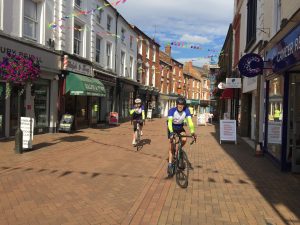 Our final night is at Premier Inn #11. It’s almost midnight. Having reviewed the day and completed this blog, we’re too tired to think about tomorrow and our finish in Oxford. For the last 13 days we’ve been in a 101 CRUK Shop Cycle bubble, not knowing what’s happening in the rest of the world, being completely focused on this challenge (although Patrick did report that his football team, Sheffield Wednesday had only drawn tonight against Sunderland). Tomorrow we’ll emerge from that world, when we reach the CRUK research centre in Oxford.

And now for the stars of the show – the CRUK shops, along with Patrick’s key facts 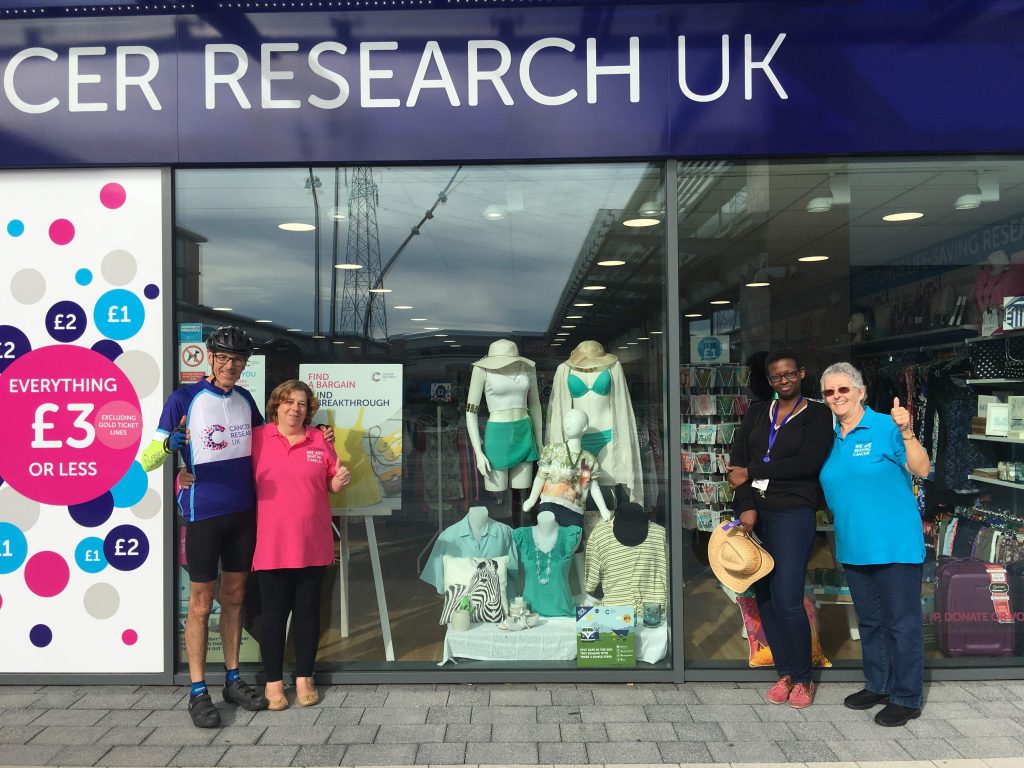 Key Fact – From 1700 – 1860, half the city’s population made a living from the ribbon weaving industry 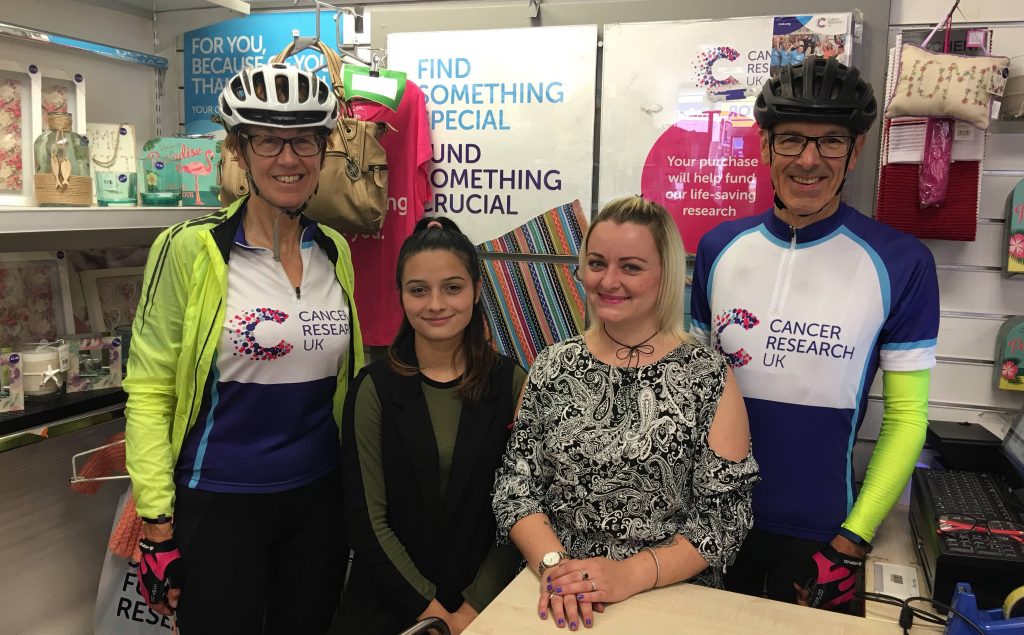 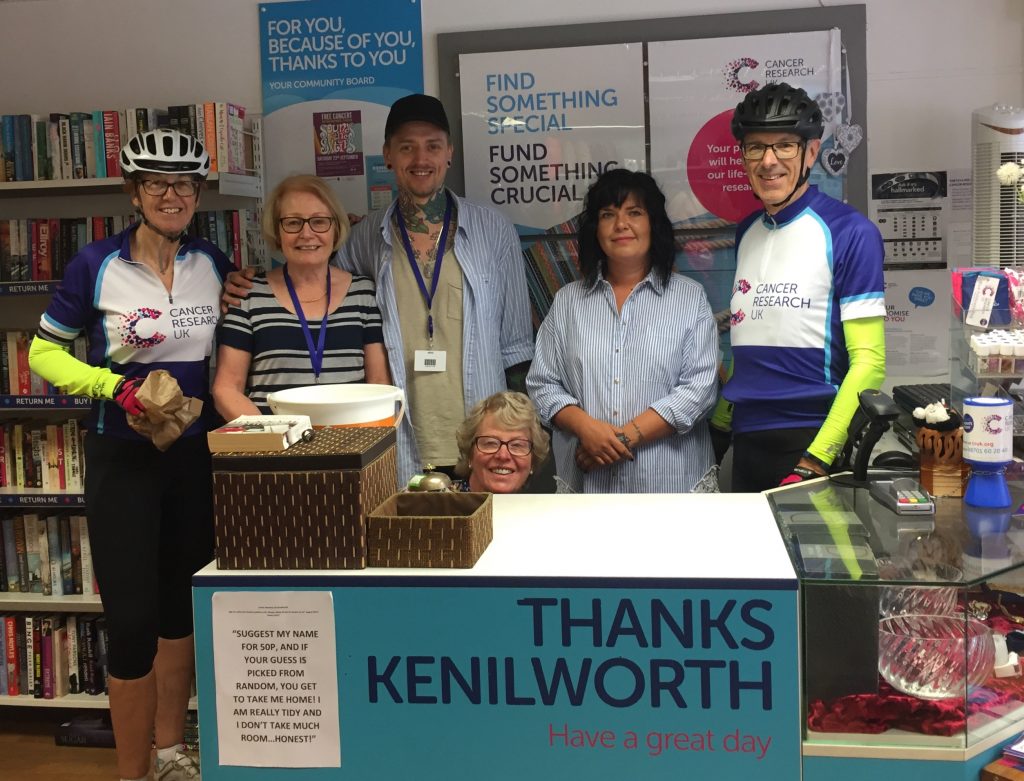 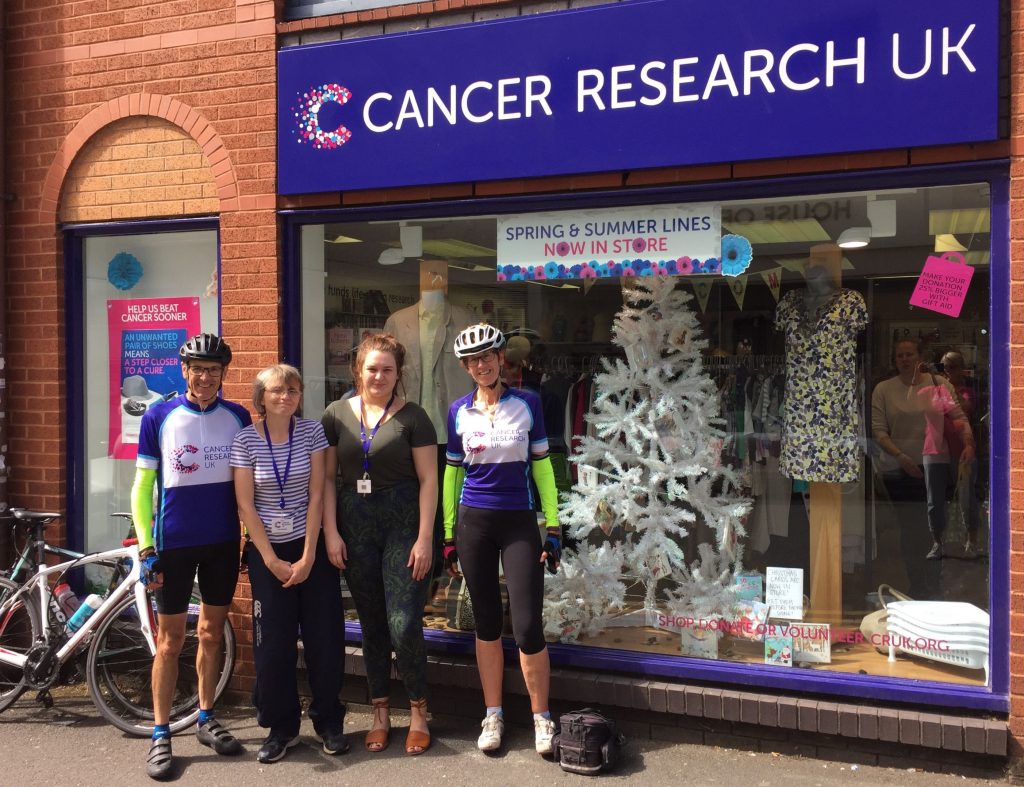 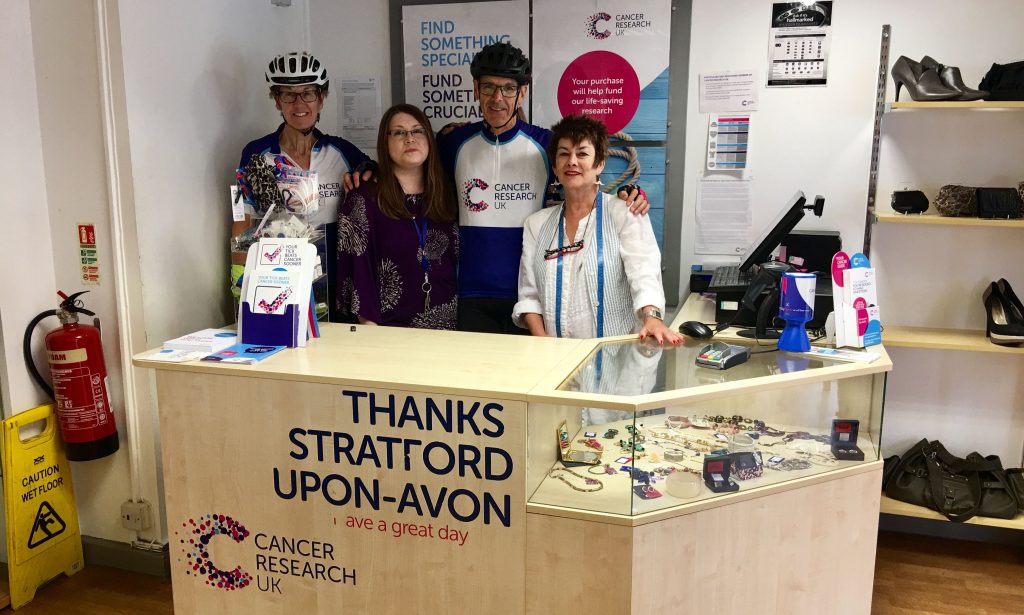 Key Fact – Banbury is famous for Banbury cakes, similar to Eccles cakes , but oval in shape 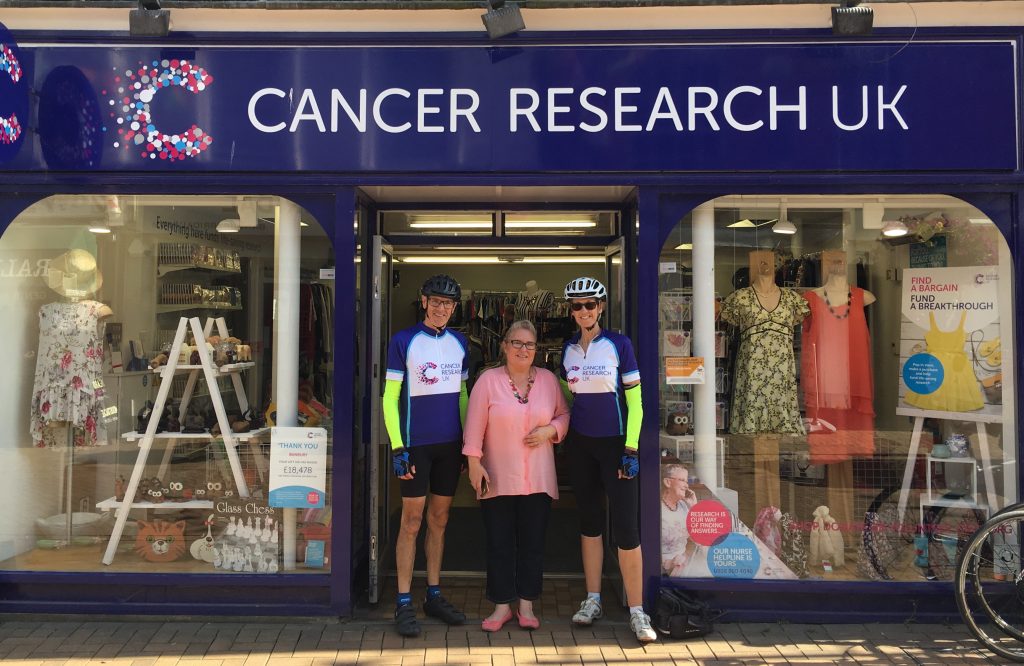