THERE’S ALWAYS AN UP AFTER A DOWN 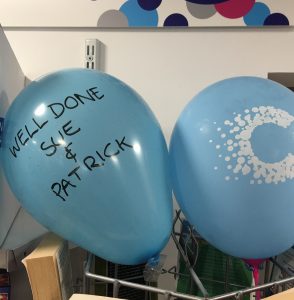 After an exhausting day on Monday, it didn’t finish well. It was 10.15pm when Patrick realised he couldn’t find his wallet. Having emptied the contents of all bags, we identified that it wasn’t in the room. He tried to remember where he’d last had it, but wasn’t too sure, so made several phone calls to places we’d been to see if it had been handed in. This was to no avail. There was only one thing to do – cancel all his cards. After another  hour he’d completed this task apart from one, which he couldn’t remember which bank had issued it. We had things to do before going to bed and this really didn’t help when we were so tired. We tried to be philosophical about this relatively trivial loss, but still felt down when we finally went to sleep just before 1pm.

When my Bruce Springsteen alarm woke us up at 6.45pm, it really didn’t feel as if it was morning. We had to force ourselves to get up to begin the prep. for today’s cycle. Patrick had remembered which bank the final card was with and phoned to cancel that one (realising that he’d cancelled a card the previous night that wasn’t actually in his wallet).

We joined Jo (Support Manager Week 2) for breakfast and related the frustrations of the previous night. As we were about to leave, one of the reception staff came over to our table and I screamed – she had Patrick’s wallet in her hand! One of the other guests had found it in the car park. A positive beginning to the day and we tried not to think about the time we’d wasted hunting for it and then cancelling cards. Time that could have been sleeping time.

When we pedalled off we felt good – the missing wallet issue was resolved, the sun was shining and our itinerary was less manic than yesterday with 7 shops to visit. Our journey to Cotteridge then Shirley and onto Solihull was through suburbia. The road surfaces were good, the traffic was not as threatening as yesterday and we had a good feeling about the day. We did have to work reasonably hard for the first 12 miles as ‘suburbia’ was quite hilly. We made the most of the downhills – high gear and pedal like mad to have maximum momentum to take you up the other side.

When we arrived in the centre of Solihull, Gerry the Garmin (satnav) got confused by the pedestrian areas. Whilst we were double checking with Google maps on the phone, a voice said “hello, again”. It was John the CRUK driver who we’d met earlier in the day. He very helpfully led us to the shop. I love the ‘Life-Saving Items in Transit’ on his van. 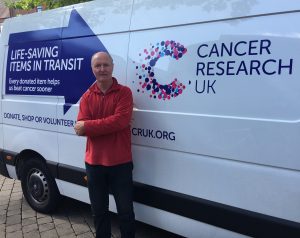 We’ve learned a lot about CRUK retail over the last 12 days. One of the things we were completely unaware of, is that every item of stock is dated when it it is put out for sale. If it hasn’t sold within 2 weeks, it’s moved on to another shop. In this way there’s always something new for regular customers. Also, I had never imagined household items and bric a brac would sell very well. However, having heard how much cash is generated by such items every week, I’ve decided to go through my cupboards and identify what can be take my local shop in Wantage.

We were pleased to see Derek and his wife Helen waiting for us at the Solihull shop. Derek is the other consumer member on the NCRI (National Clinical Research Institute) Prostate Clinical Studies Group, which I belong to. Thank you for the pastries from Carluccios and a bit of Solihull history, Derek and Helen. 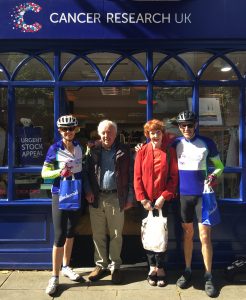 On the journey from Solihull to Nuneaton we felt energised. We pedalled at a good pace through the rolling countryside as the sun shone. It was a big contrast to yesterday. We once again tried to make the most of the downhill sections to get up hill. We had a break at Meridan, where a 500 year old stone cross marks the centre of England. 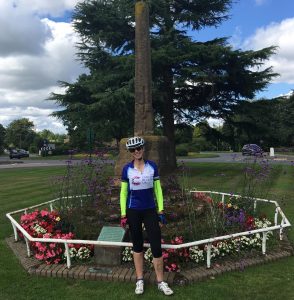 In Nuneaton we were joined by Jo’s brother, Michael. His order of 4 coffees seemed a challenge for the assistant in The Farmhouse Cafe. He did ask if it would be possible to have the before the News at Six. Despite her asking whether we required milk in the flat whites, the coffees were fine when they were ready for collection 15 minutes later. 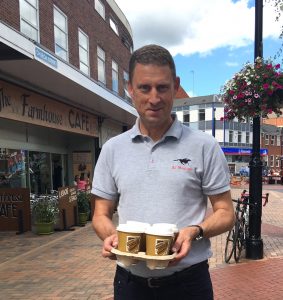 Patrick rummaged through some old records in one of the shops today. This particular one prompted him to give a lunchtime serenade. Stick to the cycling please Patrick! 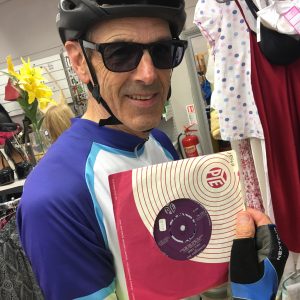 The rest of our day’s cycling was uneventful. That’s a very good thing after our low yesterday (but motivated by our visits to the shops and their welcomes and chats).We continued to enjoy the scenery and feel positive. 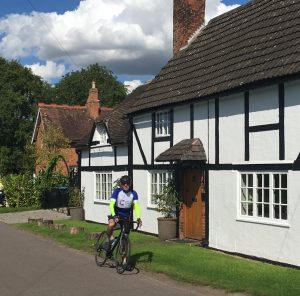 Once again in Rugby, we had difficulty finding the route Gerry was suggesting. Not surprising when this alley was part of the route. 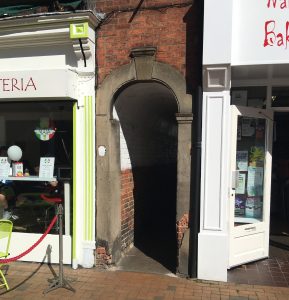 With another 7 shops under our belts, we arrived in Coventry, where this sign amused us. Who’d have thought this was the location of Coventry University. If this is all they can say about their city, I think they need my ‘key fact researcher’ to help them out. 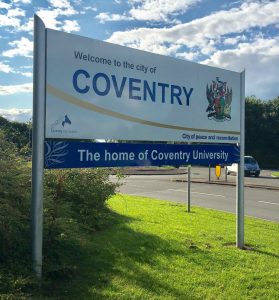 A few more minutes and we arrived at Premier Inn #10. We performed our standard evening task of cleaning Rubes and Roberto with the well named ‘Muc-off’. Another day completed and we feel on a high. What a difference a day makes. 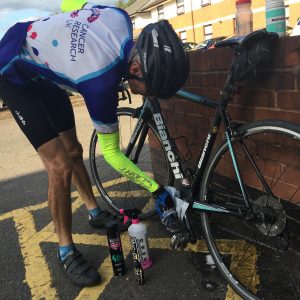 And now for the stars of the show – the CRUK shops, plus my researcher’s key facts…

Once again we loved the energy we got from the managers and staff in the shops – your welcomes really do motivate us to continue. It’s always interesting to see your customer comments books and interesting that a couple of shops today had used customer feedback for their 3 word description.For those who said they were looking forward to our visit, we hope we didn’t disappoint! 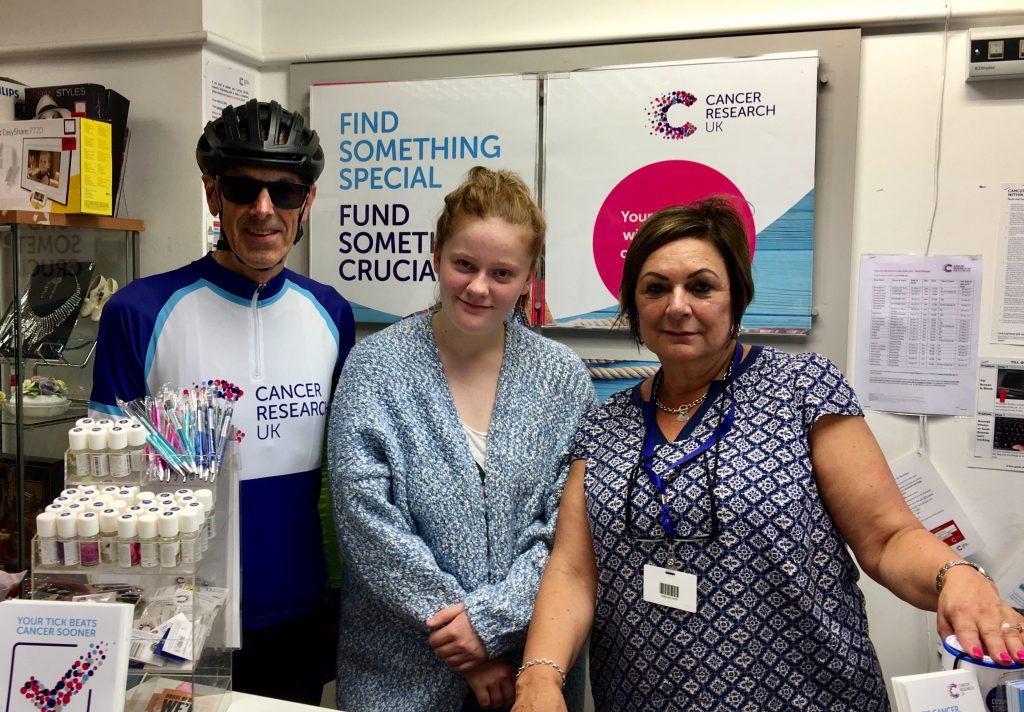 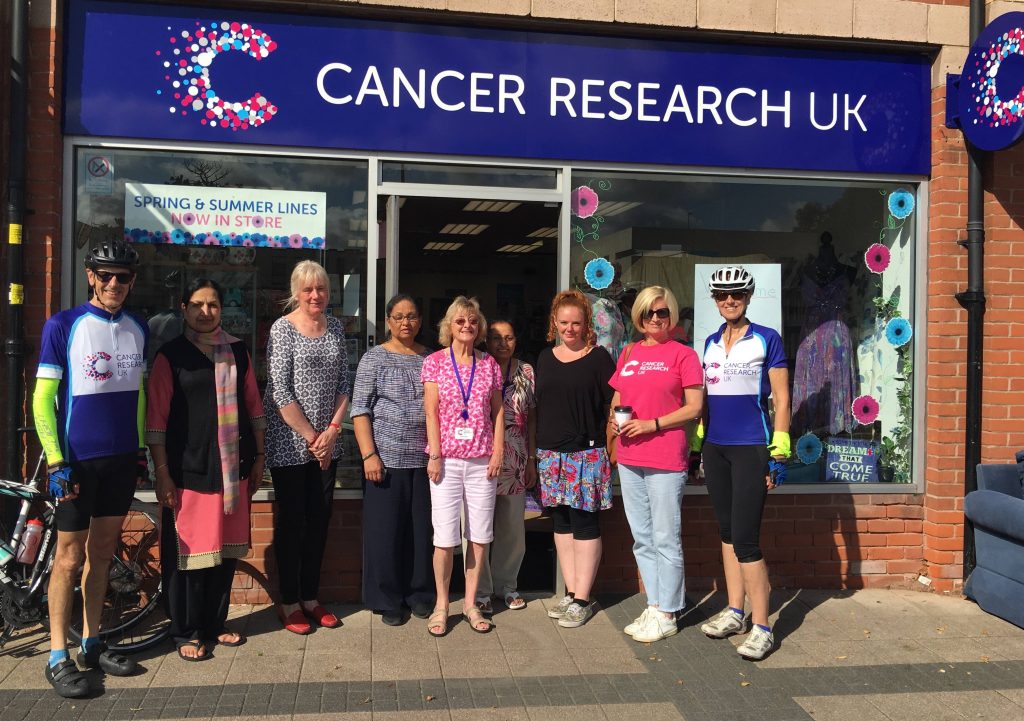 Key Fact – In 2013, the Quality of Life Index named Solihull as the best place to live in the UK 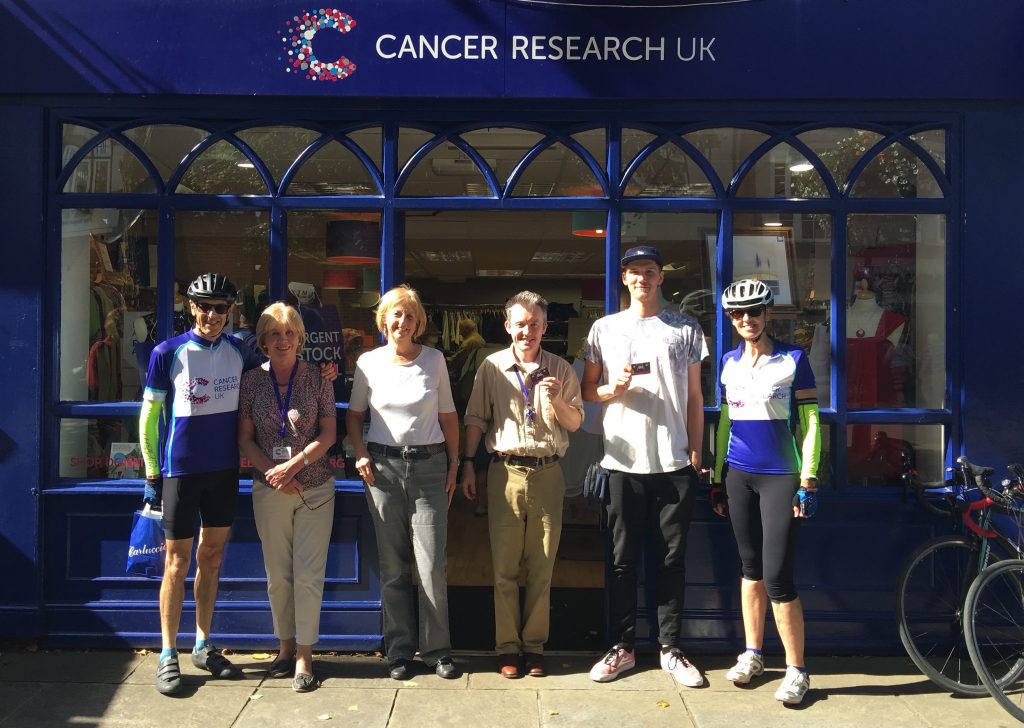 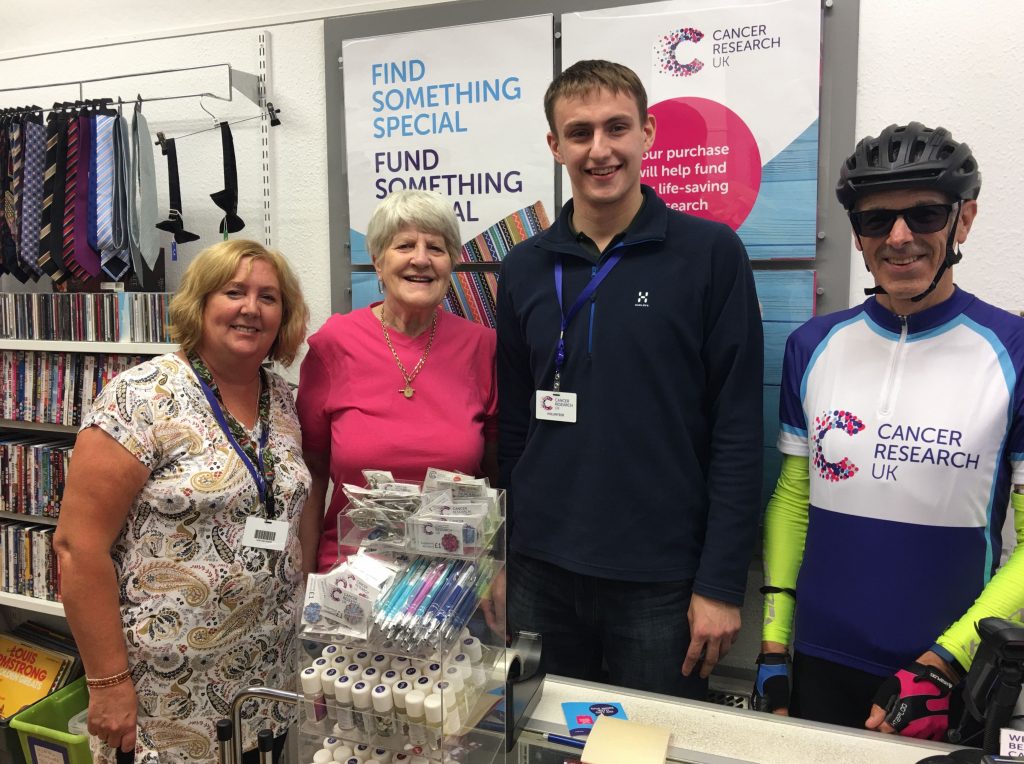 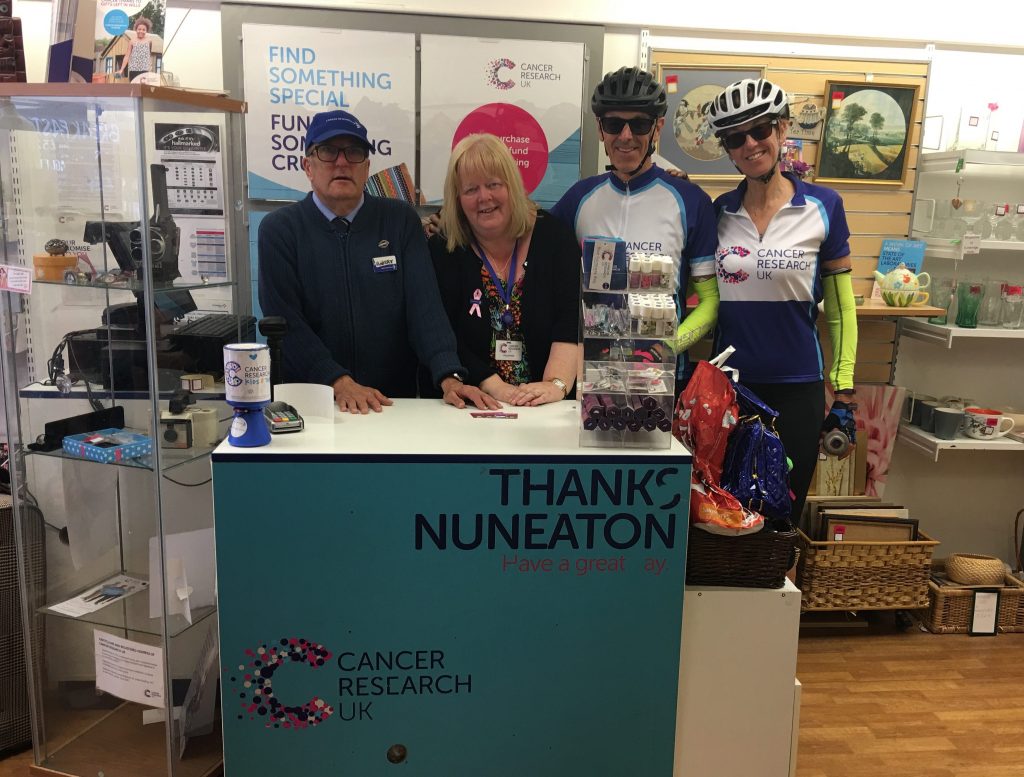 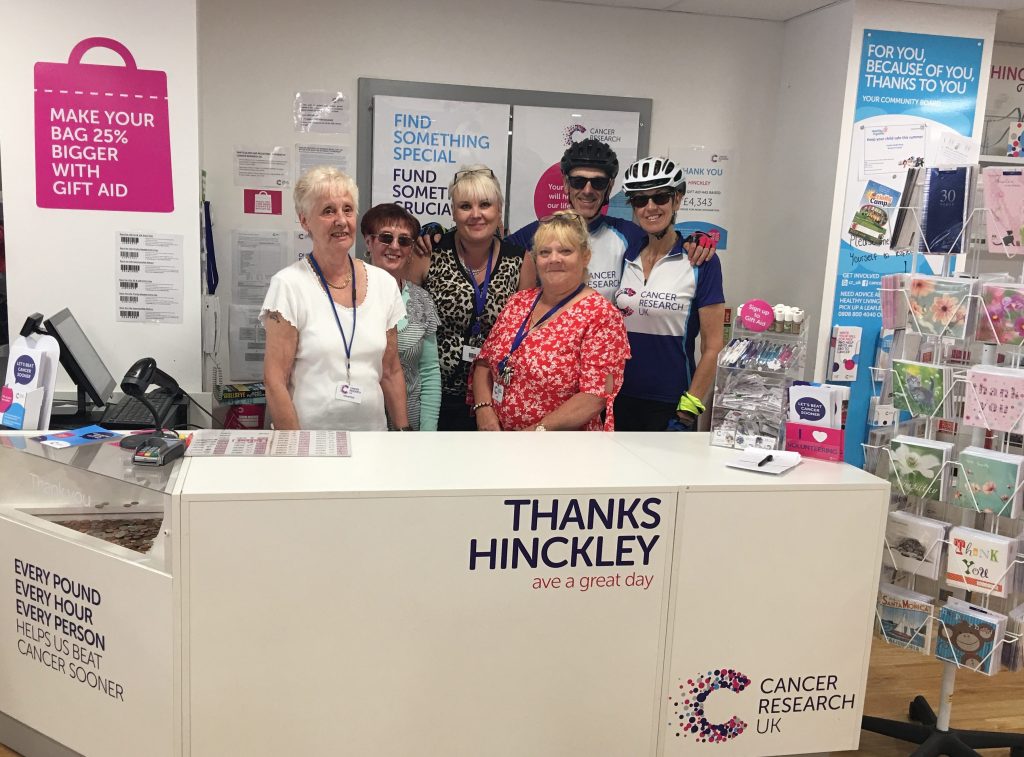 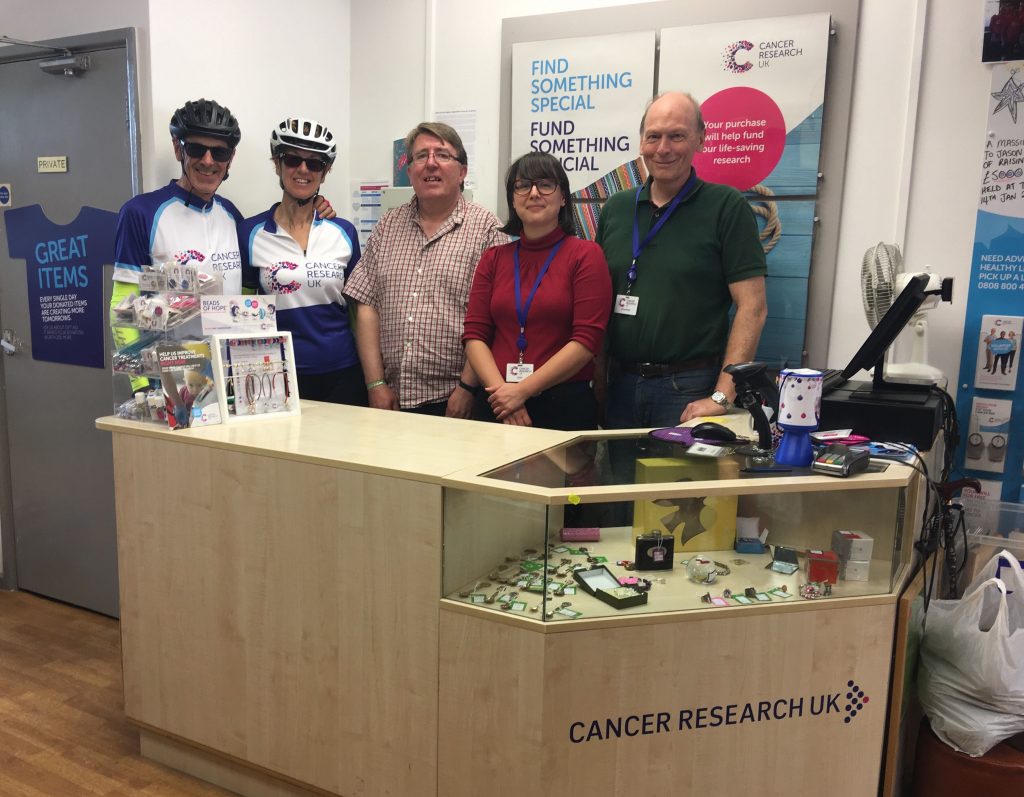 Niki (manager) with Dave and Pete