I WANT TO BE IN WOLVERHAMPTON 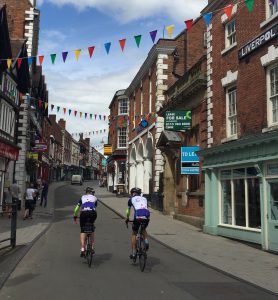 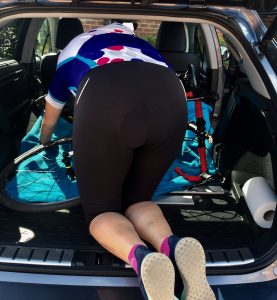 Having had breakfast in Premier Inn #7, our next task was to get Rubes sorted. Jo and I packed Rubes into the back of the car and headed off to Supreme Cycles in Crewe (opening time 10am). As soon as Les came into the front of the shop, I had confidence. He looked exactly like the sort of man I needed! When I explained my issue, he very kindly agreed to sort it out immediately. 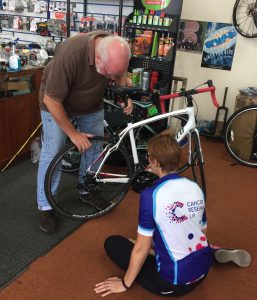 In less than 5 minutes all was resolved and Rubes was back in full working order. Thank you for your free of charge  help Les. You saved the day and allowed us to keep to our schedule. 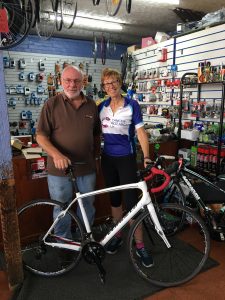 We returned to the Premier Inn, to pack all the items that had been removed from the car to create space for Rubes. There was a feeling of relief all round when we were ready to pedal off. Whilst the issue had been a nuisance, the shops we had on our itinerary today are not open on a Sunday and so we had however long we needed to pedal our way to Wolverhampton. Just as well as we were 2 hours behind schedule when we left Crewe 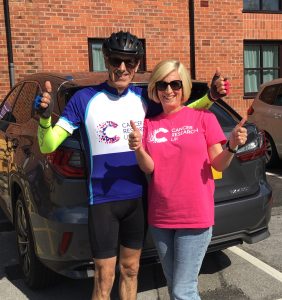 The first part of our journey involved cycling back to Nantwich. This was all rather tedious as we’d come from the Nantwich shop yesterday. However, the sun was shining and as we reached the outskirts of Nantwich we saw the competitors in the Nantwich triathlon, running. We spotted one of them wearing a CRUK running vest.

As we emerged the other side of Nantwich, most of our route to Whitchurch was on an unclassified road. Our progress was good. The conditions were perfect for cycling – not too hot, dry, no wind, a good road surface, the landscape had relatively gentle undulations and we were conscious that with a delayed start, we wanted to get some miles under belt so that our arrival in Wolverhampton would not be too late. The later we arrived, the less sleep we would get. My Fitbit showed that since starting the 101 challenge, I had only managed greater than 6 hours sleep on 3 nights.

Our first stop was in Whitchurch. Having taken a quick photo in front of the CRUK shop, Jo had identified a coffee and cake shop across the road – ‘Sentiments’ run by Jayne and Trevor. It seemed a shame not to try their fare. I can highly recommend the fruit scones, which had a very light texture. Whilst we were drinking our coffees, we were discussing a conversation we’d heard between a mum and 2 kids, aged approx 4 and 6. As the three of us were having our photo taken outside the CRUK shop, we heard the mum say “no the blonde one’s not cycling”. We mused over what the child’s question had been. 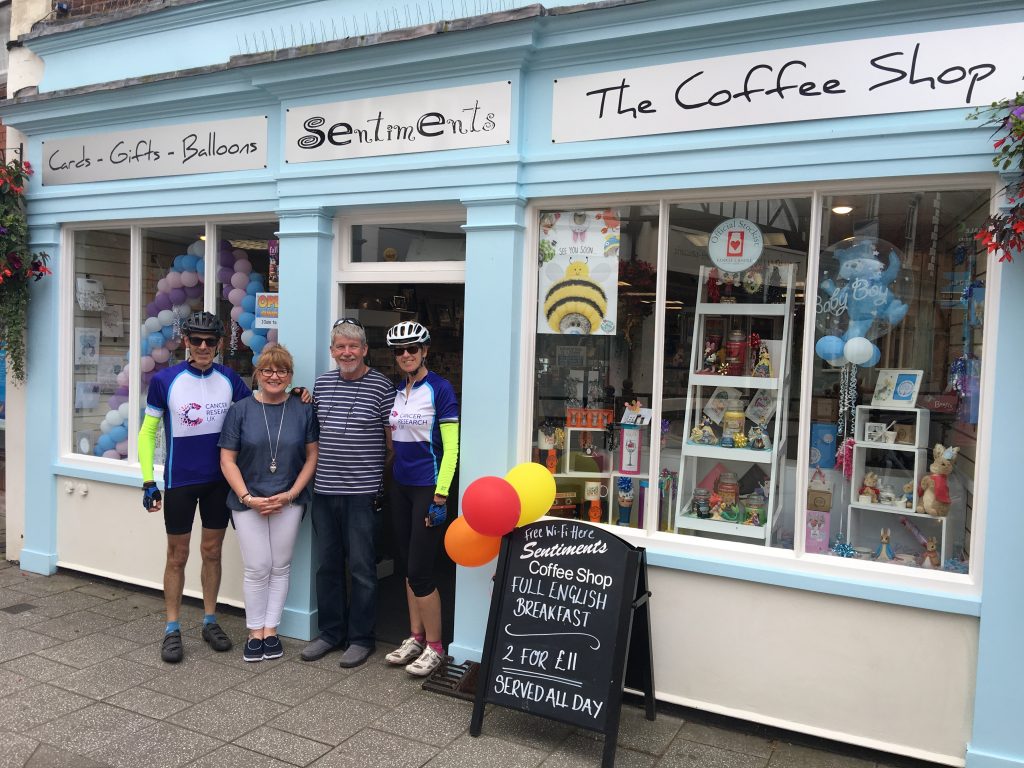 Having spent 45 minutes in ‘Sentiments’, we pedalled off towards Market Drayton.  We continued on unclassified roads, pedalling at a fair old lick and enjoying the scenery.We were feeling good. By the time we reached Market Drayton we’d done more than 25% of today’s route. Cyclists were out in force today – 3 pelotons of serious looking cyclists, wearing their clubs’ uniforms, gently pedalling family cyclists and ones in the middle, like Patrick and I. When we reached our next destination in Wellington we had lunch on the grass in front of a Methodist church – a picnic from items Jo had purchased at Tesco. The rocket and crayfish sandwiches were particularly scrumptious!

It was a leisurely lunch – we spent more than an hour here. With two thirds of the journey done at a good pace, I was now wishing that I was in Wolverhampton (our accommodation for the night) as I was beginning to feel tired and my right buttock had had enough of being in the saddle today.

Wellington is next to Telford, which has some excellent cycleways, including ways to cross roundabouts by going over bridges. These aerial route are far better than the tunnels we encountered last Saturday in Stevenage. When you emerge from a series of tunnels under roundabouts you’re disoriented and realise you’ve exited at the wrong point.

We noticed this business as we pedalled along. An interesting concept for business development. Unfortunately we couldn’t see over the wall to view the canine cleansing. 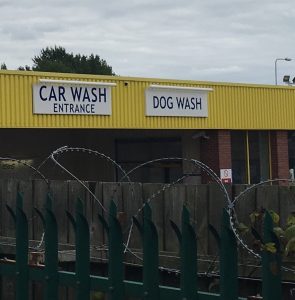 Whilst the cycleways were good quality, they were slower than cycling on the roads, due to ‘cyclist calming measures’ and pedestrians. Outside the town the pedestrians disappeared, but so did the decent surface. Despite it being part of the National Cycle Network for almost a mile we had little more than a farm track. Having experienced the puncture in Rubes’ rear wheel yesterday, we were cautious and at times carried Rubes and Roberto. For just less than half a mile we walked them down the track to avoid the significant stones. We were relieved when the cycle track finished and we were back to cycling on a road. We’d travelled less than 7 miles since we left Wellington at an average speed of 8 miles/hour. At this rate it would take us another 2.5 hours to reach our destination – I just wanted to be in Wolverhampton! 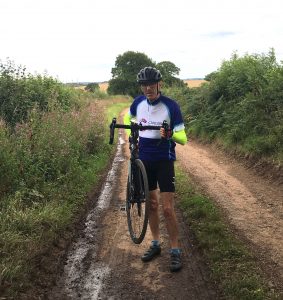 Once on the roads our speed picked up significantly. En-route Patrick considered switching to an alternative bike, but decided to stick with Roberto. 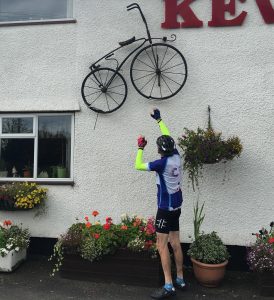 We were entertained by this village name. Patrick suggested it sounded like a Dickens’ character  – Wackford Crudgington. However, the place name which remains the most ridiculous is one we came across last Sunday – Gayday-cum-Wendy. 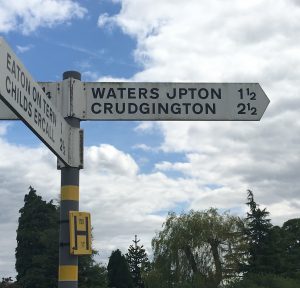 7 miles out from our destination we were still in beautiful countryside but my rear was uncomfortable.  I stood up in the saddle intermittently to  gain some relief. By now I really wanted to be in Wolverhampton! We rejoiced when we passed the sign ‘Welcome to the city of Wolverhampton’. Just 4 miles to go to the city centre. Jo had sent us a text advising the roads were really not cycle friendly, so we were pleased when we moved onto a cycle way next to the canal which had a reasonable surface. 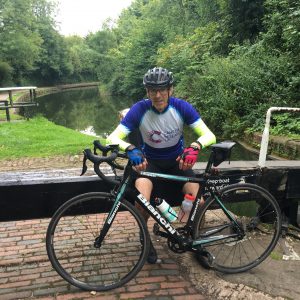 However, whilst it was a peaceful, attractive, safe route, the journey was once again slow.We had to  dismount when there was either a lock with a bridge and steps, or a ramp up the lock which was too narrow to safely cycle up. I now know Wolverhampton has 21 locks in that short distance! 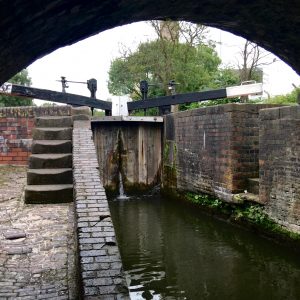 We eventually arrived at the Premier Inn to be greeted by SMW2 (Support Manager Week 2 – aka Jo) with our gear for cleaning Rubes and Roberto. Having completed this daily task, we had a quick turn around of 25 minutes, before we went out for a curry. Even a quick shower can act as an effective antidote to the day’s activities. Such pleasure, but no time to linger. We were so pleased to eventually be in Wolverhampton!

The 3 CRUK shops we visited do not open on a Sunday.here are the photos along with my researcher’s key facts 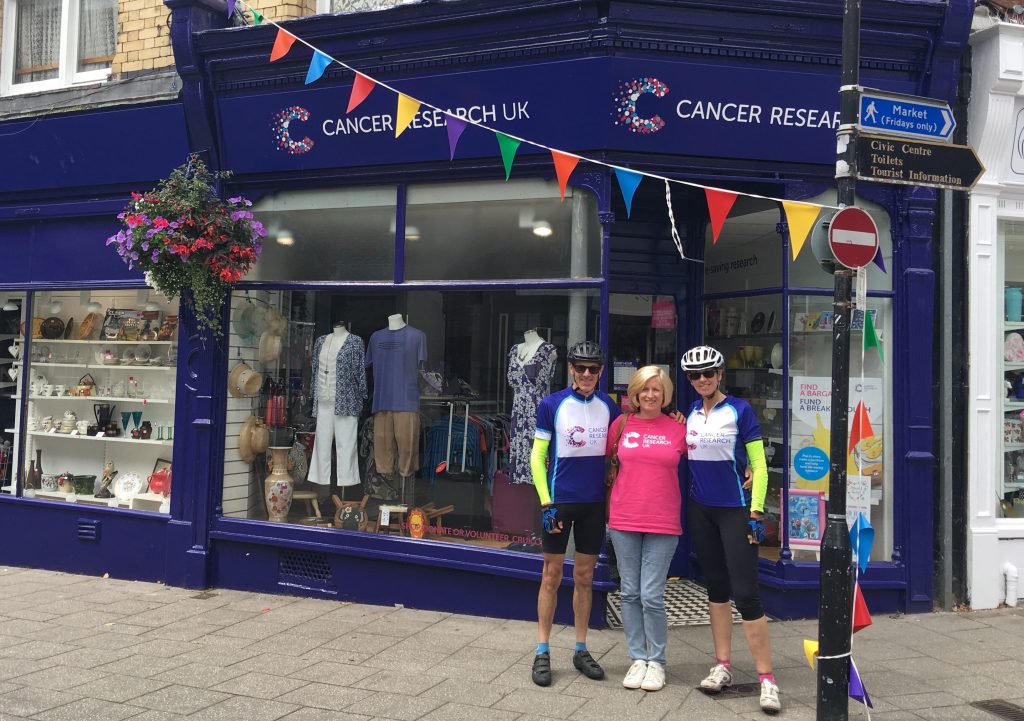 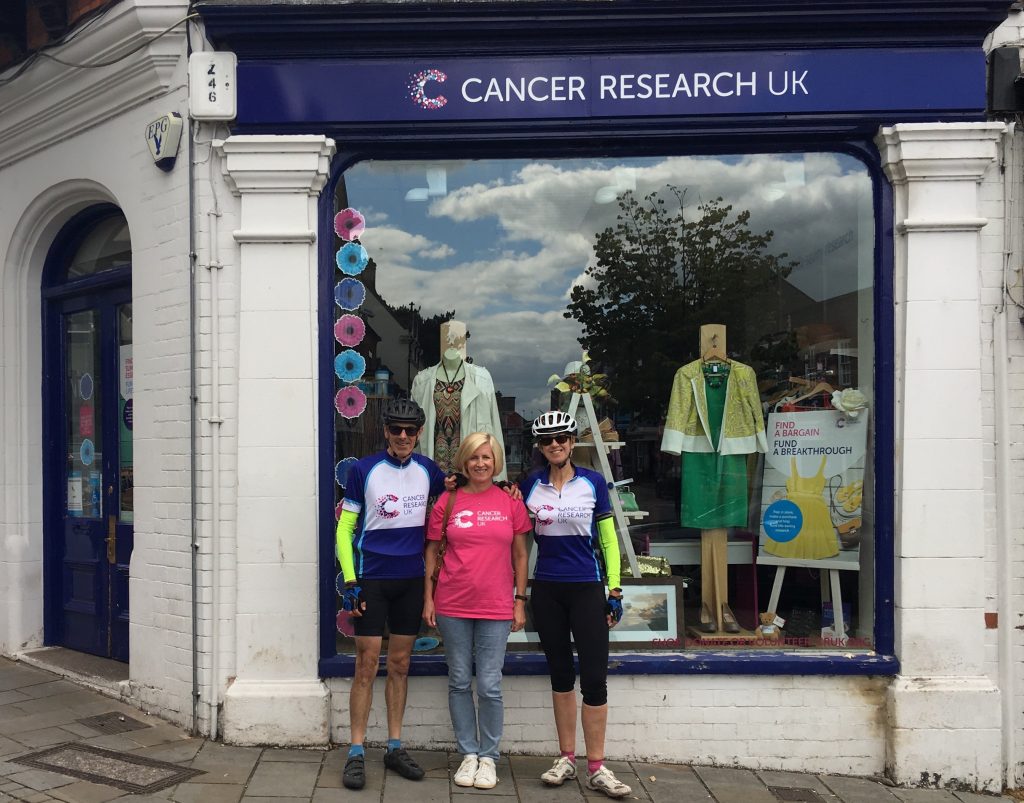 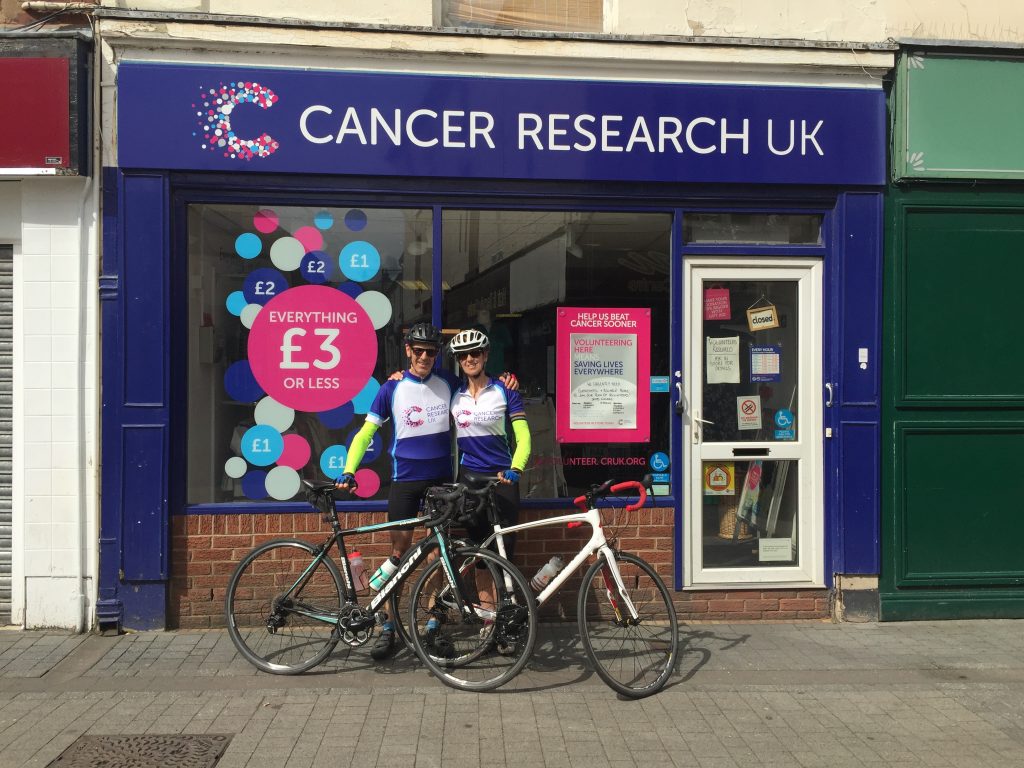